We had big plans to fully map out the area and finally do the Wipe-Out Hill trail. We had always done Sevenmile Rim and then hopped on the end of Wipe-Out Hill to do the big obstacle and head out to the highway. This time we were going to do it right.

We got started on Sevenmile Rim at a good hour and it wasn't long before everyone was dropping down the Big Ledge. The weather was really looking good, so we took out windows and dropped soft tops.

We followed the trail out to the edge of the mesa and really enjoyed the views from up there. It really is a pretty area, and it's too bad there isn't a parking area there, too. There just isn't anywhere to put a few vehicles for a break, so we kept going.

We were glad that we had the waypoint marked for the turnoff for Uranium Arch, because the paint on the rock would have been missed. We saw it only after we knew we were there.

The descent down to the arch is still a little treacherous, but everyone made it without any issues. The drop-off down the ledge is tippy, and it puts you close to the edge.

Uranium Arch is pretty cool, so we all walked down to climb into it. The weather was still awesome, and you could tell we were in no hurry to leave.

Still, we got going again and headed back up to the main trail. It wasn't long before we were at the Silver Crack. Like we've done before, everyone lined up in the Crack for pictures. It's pretty cool to get us all in a line like that. You can't do that at the Golden Crack.

We were planning on doing the entire trail this time, so we didn't skip the overlook. We made a couple of wrong turns, but eventually we found it. We all thought it was a big disappointment, actually. The views from the sides of the mesa where our trail was earlier were gorgeous, but this overlook just let us view the highway and more of the scenery we already had. It really wasn't worth the drive out to the overlook, but at least now we know what to expect.

We found our way back to the trail and kept on going. This part of the trail was easy, with fast dirt roads. We soon saw the two ledges that would get us up and between the two buttes. Monitor Butte was on our left and Merrimac Butte was on our right.

Don tried the biggest ledge but soon decided not to risk any breakage. He went over to do the smaller ledge, and everyone else followed over that ledge. We were all being careful.

Coming around Merrimac Butte, we saw the Burnt Toast rocks. Everyone posed for a picture between them.

When we got to the Tippy Slickrock section, everyone decided to stay on the main trail instead of following the bypass. We all got tippy but no one got too light. Soon we were at the end of the trail.

This was a good time to stop for lunch, but it was insanely windy. It was also a little chilly. A few people played on the Wipe-Out Hill obstacle while others ate lunch. Some of us ate lunch in our Jeeps to get out of the wind.

When everyone was ready to go, we headed down the Monitor and Merrimac Buttes trail. Sevenmile Rim is always a blast, and we all had a great time. 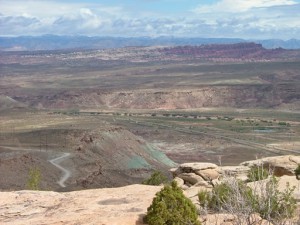 Led by Monica I.
We had planned on running another trail after Sevenmile Rim but the day ended up being one of those trail runs where things just kept breaking. First Kendall snapped his steering in half in the Silver Crack, then Robert’s leaf springs came right off the frame. We went into town…
Join Us!
If you aren’t a Member or Subscriber, you can’t see all of the content on this site. Get membership information to see why this site is best when you join and log in