Trail Run on May 14, 2017
Report and photos by Monica I., Trail Leader
View trail information for Secret Spire

It had been way too long since we'd been on Secret Spire.  It was a new trail for a few of us, too, and we were looking forward to it.  We'd already seen some amazing sights, and it was mid-afternoon when we started the trail.  It was easy to find the trailhead, but we blew right past the first turn and had to back up a bit.  Then we were off to the good stuff.

We saw there were "SS" signs marking the way, and they looked old.  That just showed us how long it had been for us.  We wanted to see all three spurs, so we headed to the overlook first.  It's a long stretch of trail through the desert, but easy enough.  We found the best place to take pictures and everyone took their turn getting really close to the edge then backing away.  We talked about how easy it would be to accidentally drive off of the edge, especially because your vehicle is pointing down a bit.  The photos were cool but we were glad to be away from the edge.  We could see the very top of Secret Spire across the canyon -- so close, but so far away.

We backtracked to get to the next spur, and grinned as we came around the corner to find the wall of slickrock.  We all drove up and around the dome, having a great time.  When we came over the top, Monica talked about how we'd spent a lot of time wandering around lost up there, so it was good we had a GPS track with us this time.  We found our way to the other side pretty easily.

The next spur took us to Dellenbaugh Tunnel.  We parked at the turnaround and walked in wind so strong we couldn't wear our hats.  It was nice to get down into the tunnel.  On the other side, Matt walked onto the ledge a short distance but then turned around.  It was just too narrow.

We headed back to the big bowl of slickrock and realized that the trail was now nicely marked, and our old track for Secret Spire was pretty off.  We were glad to find that the route was now easy to spot.  That was a nice improvement.

We climbed up to Tombstone Butte and then headed over to the last and final leg at Secret Spire.  We parked again and walked to the spire, and it was pretty awesome.  Everyone had to pretend they were holding it up, and we wandered around for a bit.  We wanted to hang out, but we still planned on doing Crystal Geyser before ending up back in Green River.  So, we headed off to our last trail. 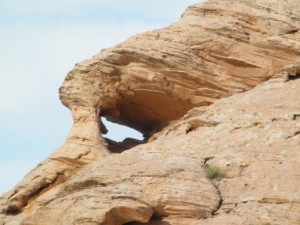 Led by Monica I.
We had already completed Spring Canyon Bottom and Hey Joe Canyon, and we ended up with enough time to also do Secret Spire. The day was starting to cool off, and it promised to be a nice run. We also found out that the new version of the Garmin software…
Join Us!
If you aren’t a Member or Subscriber, you can’t see all of the content on this site. Get membership information to see why this site is best when you join and log in