We had our fingers crossed and all of the wishing worked because we had fantastic weather. When we first did Santa Fe Peak the fog and clouds were so thick that we didn't really see much of the scenery around the trail. We were really looking forward to really seeing everything this time.

It wasn't long before we were headed up the trail. Fall had really started and we saw aspen leaves changing to yellow on our drive to the trail. There weren't many aspens near the trail itself but the fall colors were all around us.

The climb through the trees was uneventful, and when we got to the Quail Mine we saw a group of vehicles heading down. We found room at that switchback to get out of the way to let them by us. It worked out very well.

The climb to the top was absolutely gorgeous. Hoa had some photographer friends with him and they all enjoyed taking lots of pictures of the mountains around us.

The last shelf road around the top of the peak itself was a little daunting the first time because we couldn't see how far the drop off really was. This time it was dry and the skies were clear so we could see everything. It was still a bit intimidating but somehow it was easier when we could see better.

When we got to the end no one decided to continue down the last little bit so we all stopped. We were walking around for a while. It was odd because it wasn't windy at all even though we were at the top of a mountain. The sun felt good and no one wanted to leave. Even though it was a bit early for lunch we decided to eat there. It was just too perfect to leave it just yet.

But we had a lot of trails to do so we eventually packed up and headed down. We saw a couple other vehicles but they took advantage of the Quail Mine switchback to let our group go past them.

Once we got back down to Montezuma we headed one block over to start up Saints John. It was already the perfect day and we were just getting started. 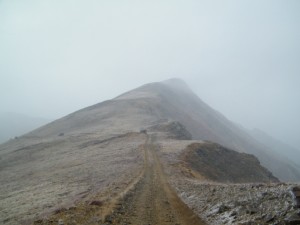 Led by Monica I.
Santa Fe Peak is one of those trails. We tried to run it in 2007 but when we got to the exposed section there was just too much snow. We turned around and headed back down, intending to run it in 2008. But when we got there in 2008 there…
Join Us!
If you aren’t a Member or Subscriber, you can’t see all of the content on this site. Get membership information to see why this site is best when you join and log in