We had seen a lot of cars on the Moffat Tunnel Road, and the trend continued on Rollins Pass East. The summer was winding to a close for kids in public schools, and it looked like everyone was getting out to enjoy one of the last weekends of the season. There were lots of campers as well as day trippers. We started up and ended up behind other vehicles off and on, most of them letting us pass.

We didn't do the mud puddles on the way up, but then we went through them on the way down for some reason. They were nice and smooth on the bottom, as always. Our goal was Jenny Creek, so we turned off and away from the traffic as soon as we got to the trailhead.

After we finished Jenny Creek we found ourselves in a lot of vehicles at Yankee Doodle Lake. We didn't stop, passing slowly through the group and heading up the mountain.

The day was perfect, with big skies and lush greens. There was still a bit of snow next to Yankee Doodle Lake, too. When we got to Jenny Lake, we were surprised to see fewer people than usual, especially because of all of the traffic and people on the way up. We hung out there for a bit enjoying the cooler temperatures and gorgeous scenery.

The trip up to the end of the driveable trail was nice and clear. When we got to the end we parked right next to the gate and got out. Some of us climbed to the top of the hill made by cutting the railroad grade, and we saw hikers all over the place working their ways up and down from the Needle Eye Tunnel. We'd done that hike before and the clouds were rolling in, so we decided to skip it.

We headed down, and it was uneventful the whole way. We stopped at the group campsite to find some people there, but not many. We'd need to camp there as a group sometime. When we got to the end, we headed off to Moffat Tunnel to check things out there. It was a good trip. 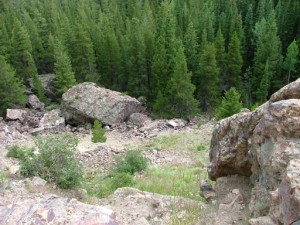