We had just completed Bullion King Lake, and then we backtracked on Highway 550 to the Red Mountain Pass trailhead. Before long we were back on dirt and gravel, and after a brief climb we came to a creek where you could either take the bridge or drive through the water. That was a no-brainer, and we bypassed the bridge. The water crossing was not much of a challenge but it was fun.

After a brief climb we started running into various mine structures. We stopped at the Yankee Girl Mine and looked around for a bit. We couldn't help but feel bad for all the folks traveling on Highway 550 below who were only seeing the mine buildings from a distance instead of up close. After a few pictures we were soon on our way again.

We meandered through the myriad of mines and mining structures stopping occasionally for a few pictures. As we worked our way up towards the top, we found a rental truck stuck in the trail we needed to take. We were sure what the truck was doing up there, but help had arrived and they were soon out of the way so we proceeded on.

Soon we were at the Longfellow Mine and back to Highway 550. We made the hard u-turn and continued heading south parallel with the pavement. The road continued for several miles just meandering among the trees and occasionally it gave us a view of the highway below. At one point we could clearly see the Boullion King Mine and trail that we had traversed earlier in the day. It was quite a sight to see.

Before long we came upon the Brooklyn Mine, the last mine before we came to the pavement again. This was definitely a trail that we will want to do again when we have more time to do some exploring. For this day, though, we were soon on to Ophir Pass. 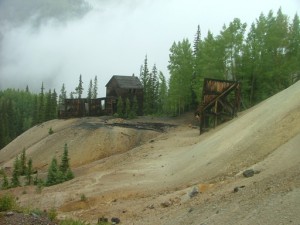 Led by Monica I.
We had a long trip in the Silverton and Ouray area, but it was a good one. We checked out of our hotels and packed up to leave, but we had at least one more trail to run before getting home to Denver. We had quite a few more mines…
Join Us!
If you aren’t a Member or Subscriber, you can’t see all of the content on this site. Get membership information to see why this site is best when you join and log in