We had a long trip in the Silverton and Ouray area, but it was a good one. We checked out of our hotels and packed up to leave, but we had at least one more trail to run before getting home to Denver. We had quite a few more mines to see before the week was over.

We had great weather up until the night before when it started raining. Unfortunately, it was still raining and it was pretty chilly. We hoped to time it well so we could eat lunch in Ouray on the way home, but we all packed a lunch just in case we'd be eating on the trail.

We were going to run it backwards, from Silverton to Ouray. We found the trailhead easily enough and aired down, just in case. We really didn't need to, but we didn't know that at the time.

The trail started out mellow, with a few mining buildings to see on the sides of the trail. The trail climbed through the trees, and we could see the highway here and there. It was pretty cool to see everyone on the pavement while we enjoyed scenery.

Of course, we couldn't see very far. The rain was still coming down, and the clouds hung low. But it was still scenic.

We knew we were getting close to the highway again, and then we could see Longfellow Mine. We checked out the tunnel mine next to it, and then popped out next to the pavement. It must have looked very odd to see a line of four wet and muddy Jeeps come out of the woods and then drive in a parade right back into the woods. We hoped it got a laugh from at least one passing motorist.

The Longfellow Mine was pretty cool, and we stayed for awhile. It was only sprinkling, so the weather was cooperating. It had some very cool equipment outside, and we all wondered how it worked. Michael, Don and Walt all discussed it and how they thought it had performed when the mine was still up and running.

We kept going, checking out a spur before getting to the flat spot at the National Bell Mine. Another spur went out to the highway, but we kept at it so we could see more of the mines. We kept going north.

The Genessee Mine was very cool, and also took a bit of time to explore. It is spread out over a large area, and we all walked around for a bit. You could see a lot of the rail tracks around, and see where they once connected. It must have been a large production.

You could also see the highway from there. We had passed a large structure on the highway a few times over the week, with big signs marking it as part of the Red Mountain Mine. There was also an overlook for cars there. We could see all of that from the Genessee Mine, which was pretty interesting.

We left after our exploring was finished, and then came up on the Yankee Girl Mine. We got out again, and this mine was pretty cool. It was marked with signs explaining more about the shaft mine. Some of us stood on the grate now covering the shaft while others avoided it. You could see how the cable pulled them up out of the mine. It must have been a bit scary.

There were many other buildings on the way out, all of them scenic, but we didn't do any more exploring. We were soon out, and we turned right at the pavement to head to Ouray for lunch.

It was 1PM on a Sunday, but many restaurants were closing. Others that were still open were full. We walked around town with other groups of people until we found one open place, and it wasn't very good.

We aired up in town and headed out. We'd miss the place, but we really timed it right with the rain. We cleaned mud off of our windows and headed off for home. 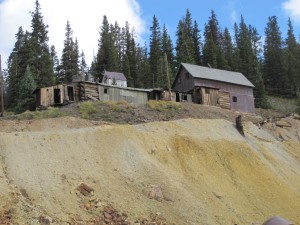 Led by Roger R.
We had just completed Bullion King Lake, and then we backtracked on Highway 550 to the Red Mountain Pass trailhead. Before long we were back on dirt and gravel, and after a brief climb we came to a creek where you could either take the bridge or drive through the…
Join Us!
If you aren’t a Member or Subscriber, you can’t see all of the content on this site. Get membership information to see why this site is best when you join and log in