It was our "snow run" trip, our last run of the season, and there wasn't much snow anywhere. We've spent a few years stuck in lots of snow on Spring Creek, so this year we decided to check out the snow on Red Elephant Hill, Mill Creek and Bill Moore Lake. We found a little bit of snow here and there, but we managed to complete all three trails without any problems.

We started with Red Elephant Hill after airing down and disconnecting in Downieville. We didn't see any snow at all on the trail. We climbed the hill and enjoyed the rocky spots.

When we got to the place in the trail that is usually tippy and a little scary, we found that it had been built up enough that it wasn't tippy anymore. We barely noticed the obstacle as we drove over it.

We saw some ATVs parked at the side of the road but no people. Then we came up on some people and they told us that an ATV had rolled off of the trail and into the ravine the week before and they were there now to retrieve it. Luckily, no one was hurt when it went.

We were hoping to help them winch it up to the trail, but it was really far from it. While we were trying to figure it out, the ATV rolled even further away. We couldn't be much help, unfortunately, so we left the group of people to figure out how to retrieve the ATV.

We cruised up the hill and over rocky sections that seemed to be easier than they were in previous years. It wasn't long at all before we were up to the corner and doing the easier section of the trail on our way to Mill Creek.

We all flexed and posed on the rocks that seem to be there in the trail for just that purpose. There was a tree down just past it that made our progress interesting, but no one hit anything.

We were soon at the Mill Creek trailhead and we left Red Elephant Hill. It's always such a good trail, and we had a great time getting there. 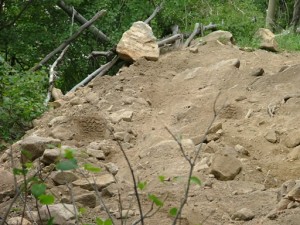