It had been way too long since we'd seen Red Cone, and we were excited to check it out. We came off of a depressingly short run on Twin Cone, and we found text messages from Matt saying he found brake caliper bolts, fixed his Jeep, and was trying to find us on Red Cone. It sounded like he was probably ahead of us because we hung out on Twin Cone for a little while when we found the overlook free. We didn't stop at the Red Cone trailhead, trying to catch up with Matt.

The trail was rocky from the start, and we were pleasantly surprised with the obstacles. We found rocks right away, and had fun with the initial hill climb on loose stones. Then we found a big rock in the middle of the trail.

Monica tried to run her passenger tires over the boulder but it didn't work, so she ran driver tires over it instead. It was a pretty big rock! Niko told us the rock hadn't been there three weeks ago when he was on the trail, so it was a surprise to him, too. He worked at it for a bit, getting stuck at almost every line until he was practically hanging off of the side of the trail. That was the trick, and he drove right up. Everyone else had to struggle a bit except for Mike, who had his narrower TJ and no issues at all.

We found bumpy spots between rock gardens and other boulder fields, and it was a blast. When we got to the Big Rocks, we didn't even stop. Each of us tried our own lines through it and around it. Monica and Mike tried the hardest line through the middle, but both of them slid around the big rock at the top instead of climbing over it. That obstacle is a good time.

It was time for a snack break, so we pulled over at a wide spot. Monica looked up and saw Matt jumping and waving his arms up ahead -- we'd found him! We drove up to where he was and found out they'd been hanging out waiting for us since getting a text from Mike. Perfect! We were all together, and we soon kept going along the trail.

The switchbacks are always tight, but no one hit anything. We came around a particularly challenging switchback, finding someone had stacked rocks in a big hole there. It was twisty and not particularly easy, but it was definitely fun. We all made it through without any real problems.

Then we could see the hill climb to Red Cone in front of us, complete with a fluffy mountain goat grazing at the bottom and posing for distant pictures. We saw a couple vehicles way up ahead, but otherwise the trail was all ours. We had fun up to the top. Monica kept going over to the bottom of the first hill to take photos of everyone coming down, enjoying what is arguably the best view up there. Everyone was smiling and having a great time, from there all the way down the next two descents. The last hill was loose and had some dips in it, but it was dry so we were fine.

We chatted with some people at the intersection with Webster Pass for a bit, and they enjoyed watching us come down it. It's always a good day when everyone you meet is in a great mood. We said our goodbyes and headed over to Radical Hill for the first time in a decade. 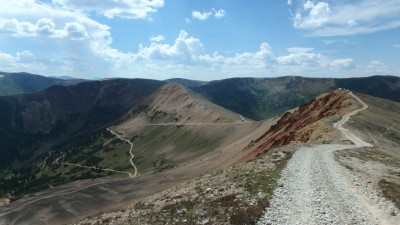