It had been 5 years since we saw Ptarmigan Pass, and that was far too long for such a fun trail. We were trying to revisit trails that we hadn't seen in awhile, and this one was at the top of our list. We ran part of Shrine Pass until we got to the bridge at the trailhead, and we headed in.

It was how we remembered it -- rocky, narrow and wet from the creek. Though passing people is definitely a concern, we got lucky and we didn't see anyone else in the creek area. We all had a blast working our way through the rocks and across the water crossings.

Dave and Randy were joining us from Minnesota, on their vacation. They noted that if this trail was in their home state that the fines we were collecting would have been massive. Apparently, you can't drive through water anywhere in Minnesota anymore, even if it's on your own land. It reminded the rest of us not to take what we have for granted. Colorado truly is a special state with some amazing offroading opportunities.

There were even some rough spots along the way, and everyone had to choose their lines carefully. Erosion along the trail made things interesting in spots, and even the big Jeeps could find challenging and fun lines.

Unfortunately, the fun along the creek ended too soon. We parked at the first wide spot to get out, visit, and stretch our legs. The temperatures had climbed a bit, and the late morning was very comfortable.

We climbed along the trail, away from the creek and up to the pass. In one narrow spot, we saw a vehicle that had gone off of the trail. We saw recovery gear, so someone had tried to retrieve the vehicle at some point. It didn't fall far, so hopefully no one was hurt.

Just after the wreck, we met a few ATVs and a UTV coming the other way. It would be the first of many such meetings along Ptarmigan Pass and McAllister Gulch as there was a huge group out for fun. It was an organized group of rentals, with lots of leaders. They had split up into about seven different groups, and we would meet them all over and over again as the day progressed.

Passing was a challenge, but we got it worked out. Everyone was very friendly and happy to be on the trail. We stopped to chat with almost everyone, and everyone was in a great mood.

We were very near the pass when we came to a meadow where the trail was wider. We stopped again, taking pictures of the line-up of Jeeps. It was one of those days for our group where we would spend a lot of time visiting and enjoying each other's company, which is always nice.

We got to the pass and found a group of ATVs, so we waved and kept going. At the intersection, we worked our way up to the overlook. There were even more ATVs up there, but there was plenty of room to park, so we stopped there for lunch. It was breezy, but there were trees available that blocked the wind, making it a great lunch spot. We hung out for awhile there.

We checked out the rest of that road, but it soon came to a dead end. The gate to go to the hut said that permits were required, so we turned around and headed back. We were soon on the main trail and heading down toward Camp Hale.

The descent was steady but not too steep. It didn't take long at all before we were at the gate and the end of Ptarmigan Pass. We went just a bit farther and turned to do McAllister Gulch. We really enjoyed the first half of the loop. 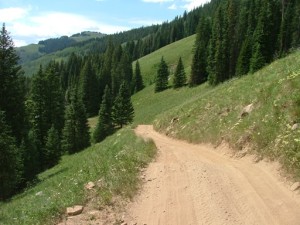 Led by Monica I.
We ran this trail right after finishing McAllister Gulch. The end of McAllister Gulch was surprisingly challenging so we had high hopes for Ptarmigan Pass. There were lots of people camping at the trailhead and lots of ATVs and other vehicles around. It was also very, very dusty and warm…
Join Us!
If you aren’t a Member or Subscriber, you can’t see all of the content on this site. Get membership information to see why this site is best when you join and log in