Trail Run on May 19, 2007
Report and photos by Monica I., Trail Leader
View trail information for Pritchett Canyon

It was our last day in Moab and we decided to run one of the craziest trails out there. Something bad always seems to happen on Pritchett Canyon, and this trip was no exception.

The carnage started early, and Michael could barely make it to the trail. On the pavement, his front tires were bouncing all over the place and he could hardly move. His front track bar bushing was pretty shot, but it didn't seem like that was enough to cause such issues. Either way, if he wanted to fix it he'd have to turn around now. He didn't want to fix it right then, so we kept on heading for the trail.

We all played on the first rock, and had a good time on the ledges. The weather was fantastic, though it looked like it might get pretty toasty. There were a few rigs catching up to us, and it turned out it was the ones from Minor Threat the day before.

We had a great time getting to Which Way, and then everyone got serious. Don took the line right up the middle, and he barely got tippy all the way up. It was the perfect line.

Michael followed, spinning up a lot of dirt and dust along the way. His line also worked out really well.

Walt started up next, but slipped off the line at the very bottom. He got really tippy, but managed to get himself back upright. From then on, his line was a bit off. It caused him to get a wheelstand and have issues here and there, but he still made it up in one piece.

Robert decided to try the line on the right side of Which Way. It was really dug out, but he powered up it. He had a scare in the middle when he bounced, but he still made it up.

Bob still had a rear locker that wouldn't stay on all the time, but he decided that Robert's line on the right was the best one. He got to about the middle of it and found a ledge that was too steep to do without a rear locker. He couldn't back down, either, so he was stuck. He winched himself to the top. At that point, the buggies behind us passed us and we didn't get anyone else behind us the rest of the day.

Everyone had a good time in the Tube, of course. Don drove both his front and rear tires over the big slab near the end, getting really tippy but not going over. Bob had some issues getting over the big rock near the start because he didn't have his rear locker, but then he got through it.

Damen's Hot Tub was dry on the bottom, and that made all the difference. We've always had our share of troubles there, but this year everyone just drove right up the slickrock face. It was a piece of cake.

We got to Rocker Knocker as the buggies in front of us were finishing up. We found the tiny bit of shade available and set up for lunch. It was reassuring to see some of the big rigs also have troubles on that obstacle.

Robert got on it first, trying a bunch of different lines. It was his first time on Rocker Knocker and he hadn't seen all of the lines that many of the rest of us had seen over the last couple of years, but he was finding his own way. He was starting to figure out that finesse wasn't going to work for him, so he finally powered up over it. He got pointed toward the edge at one point, giving us all a scare, but he got up it just fine.

Don went next, trying the usual lines. Nothing was working! The lines that worked for him before weren't working now. The bottom seemed to be a bit more dug out, and that was ruining the line. He tried many lines, but couldn't get up it. He backed down to let others try.

Michael got on it next, and his long wheelbase seemed to really help. He drove right up it on his second try, making it look insanely easy. Nice job!

Walt followed Michael, but he was having the same issues Don had. He just couldn't find the right line. He gave it a few tries, then decided to winch up. Like always, the winch seemed to barely be needed at all, hardly doing any work to pull Walt up.

Bob went next, and he realized that without a rear locker he wasn't going to be able to make it. He winched up right away, which was smart. There were plenty of other obstacles to play on.

Don tried again, but it still wasn't working for him. It was very frustrating! He tried many times, and sometimes he would get pretty close. Still, he wasn't getting over it. He finally winched himself up.

The next challenge is the rocky wall right at the top of Rocker Knocker. Everyone else was up and over it, and Robert was backed way down below it. It was Don's turn to go up it.

He was still thinking about Rocker Knocker when he got up on the slippery rocks, and his passenger tire got a little too close to the edge. Bob and Robert watched, speechless, as Don slowly fell off the side of the obstacle. He rolled toward Rocker Knocker, slowly rolling over on his top and then finally stopping on his driver's side.

Monica had been riding with Don on this trip, choosing to leave her Jeep back at the condo instead of driving it. She was in Don's Jeep as it rolled, and neither one of them was hurt other than a few scrapes on elbows. They both climbed out of the Jeep shaken but just fine. Monica's camera fell out when they were upside down, and even that wasn't damaged. All in all, it couldn't have gone any smoother.

The guys tried to tip it back over but it was too heavy. They finally used Robert's winch and a strap from Bob to gently set it back on its tires. It definitely had some damage. The windshield was down, but the glass was shattered anyway. The doors weren't on it, and it looked like they wouldn't be going back on it later. The sides of the Jeep and the hood took most of the damage, and the roll cage was trashed in the front.

Don pulled the plugs though it looked like that extra step wasn't even needed (but better to be safe than sorry). He started it up and a small puff of smoke appeared, but otherwise the Jeep was fine.

Don and Monica got back in the Jeep and drove up the offending obstacle. It was definitely stressfull but it did just fine. The whole way out (and home) Don's Jeep seemed to be in great shape other than body damage. He definitely had some good luck that time.

When we got to the big obstacles at the end, Walt and Bob went around the "easy" way at the start. It wasn't particularly easy but they got through it.

Don, Michael and Robert went the usual way. Surprisingly, they all had to work on getting up it. Don was probably still a little shaken from his rollover, and Michael got stuck on his tailpipe. It was strange having issues there.

Everyone winched up Suicide Hill. Bob discovered that the new brake on his winch also didn't work, and he couldn't stop while winching. Even with that issue and no rear locker he made it up in style.

The Rock Pile bypass looked like it did the year before. No one really had it easy, but everyone made it up.

We all took the bypass to Yellow Hill, and we were all off the trail and ready to start down the long, dirt road. Bob and Robert took off, while Don, Michael and Walt took it a little slower.

On the way back to the condo, Michael discovered that he was still really having an issue with his front tires. It was a slow trip back, but he didn't break anything further. The next morning, they changed tires all around but nothing seemed to work. He bought a new track bar and that seemed to fix the issue -- at least long enough to get him home. There is probably something else causing the track bar issue because his Jeep is brand new.

We're probably done with Pritchett Canyon for awhile. We always have so many problems! It's a fun trail, but it really takes its toll. 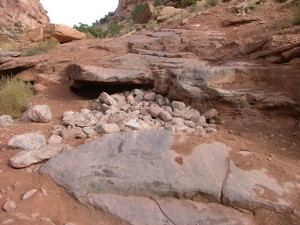 Led by Monica I.
We were all excited to do this trail — it was the first time for the group. It ended up being the roughest trail we’ve done in Moab. It’s much tougher than Behind The Rocks, though there are some places in Area BFE that make Pritchett Canyon look easy. This…
Join Us!
If you aren’t a Member or Subscriber, you can’t see all of the content on this site. Get membership information to see why this site is best when you join and log in