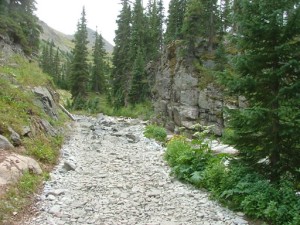 Led by Monica I.
We had spent so much time on Mineral Creek that it was already time for lunch when we got to the trailhead for Poughkeepsie Gulch. We were hoping to watch the parade of vehicles always going by the trailhead, so we set up our chairs right there. The place had…
Join Us!
If you aren’t a Member or Subscriber, you can’t see all of the content on this site. Get membership information to see why this site is best when you join and log in