Trail Run on May 15, 2004
Report and photos by Monica I., Trail Leader
View trail information for Poison Spider Mesa

We did this trail as the start of the Moab "Trifecta" of trails -- Poison Spider Mesa, Golden Spike, then Gold Bar Rim. We got on the trail at 8:45 AM, a great start to a great day. The sun was out and it was already warm and we started out on the climb up to the mesa.

It was Bob's first time on slickrock hills and it took him no time to get the hang of it. We all played in The Wedgy and Aaron took an interesting line, cutting to the right just a little bit after going in sideways. Monica and Bob both went in at a tilt.

The Waterfall was fun, as always. There were a few more bugs than usual on the trail, and they seemed to really be congregating around the Waterfall for some reason. Everyone went up the big hill at the top and we all made it look easy.

The other rock obstacles were a blast, too. We got to the top and managed to take a wrong turn somewhere and ended up on a lesser trail that cut out the first half of High Speed Mesa. We even went past the grave marker. The offshoot trail wound its way back to the trail, though, so we were on our way.

When we got to the bottom there were a few takers who played in the sand. Monica tore her way around the circle a couple of times, then Bob made some nice rooster tails behind him. Matt played awhile (making the "doing donuts in the sand" face), then Aaron dug himself into the sand in two-wheel drive. That's a great bunch of sand!

We stopped for a bit at the intersection of Poison Spider Mesa and Golden Spike, just long enough to take a picture of Pig Rock. Then we were on our way to the next trail. 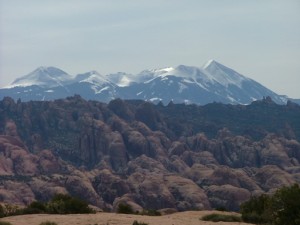