We finished our day exploring the Hayman Fire burn area by doing the Phantom Creek loop. It was the easiest of the trails so far, and the busiest. There were lots of ATVs and dirt bikes, as well as a few vehicles.

A good portion of the ATV riders did not have helmets, and most were going too fast for the conditions. More than a few accidents must happen in this area, we guessed.

There were lots of people camping, settling in for their dinner as we passed. We started on the Phantom Creek Road side and were surprised to find that it wasn't burned there. The trees were green, which was a nice break from our day of sad, burned trees.

The trail got a little confusing toward the far end, but we eventually found the intersection with Manchester Creek. We planned on taking it as far as the gate. We saw the warning sign for the gate, but then when we got to the fencing the gate was gone. ATVs rode past us and there were signs of lots of traffic, so we continued on. Very soon we were at another sign facing the other way, mentioning another gate. We never saw a gate.

We continued for a bit, but then realized we'd be there all night if we kept exploring. We soon turned back, backtracking to the Phantom Creek intersection. There were way too many spurs to check out.

Once we got to Signal Butte Road, we saw the Hayman Fire burn. It must have stopped at the creek in this area. It looked like the rest of the terrain we had seen all day -- lots of tall, black, burned trees surrounded by short, yellow aspens. It was beautiful in an odd way. It was definitely the most interesting way to see the yellow trees.

It wasn't long before we were back at the big parking area. We aired up there and reconnected, and then headed out. Some of us went to dinner in Woodland Park on the way home, and everyone got home early (compared to the times we usually get home, anyway).

It was a great, mellow finish to a very interesting day. 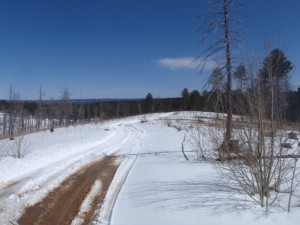 Led by Matt K.
Phantom Creek had much deeper snow on it compared to Rule Ridge. But the sun was still out and it warmed up to around 50 degrees. Right at the start of the trail, Matt got stuck in a snow drift that was deeper than the tops of his tires. So…
Join Us!
If you aren’t a Member or Subscriber, you can’t see all of the content on this site. Get membership information to see why this site is best when you join and log in