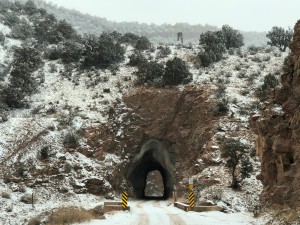 Led by Matt K.
Phantom Canyon was the second trail of the day. It started snowing and remained very cold as we got closer to starting the trail that goes north back to Cripple Creek. We stopped to take some pictures at the old trail tunnel. It’s always fun driving through the old railroad…
Join Us!
If you aren’t a Member or Subscriber, you can’t see all of the content on this site. Get membership information to see why this site is best when you join and log in