Phantom Canyon was the second and last trail of the day. It was still snowing, but not as hard. Most of Phantom Canyon had seen some traffic, but it was not plowed like Shelf Road. The snow was at least a foot deep in spots but we had no issues making it down the road.

The old train tunnels did look cool with all the snow on them.

As we got to the last bridge before getting to Cripple Creek again, the road had been plowed the rest of the way. We all had a great time driving in the snow for the day. It's not that often that both Shelf Road and Phantom Canyon Road are covered in snow from start to finish. Though we do these trails every winter, this may have been the best year because of all of the snow. 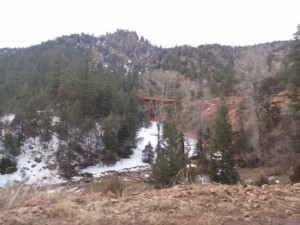