We barely had time to sleep the entire three-day weekend, and our last night was no exception. We'd seen a lot of scenery and played in the mud, so we were looking good. We were still aired down from the previous trails so it didn't take long to get from Crested Butte to wheeling again. The early scenery in the big meadows was just gorgeous, and it looked like it was going to be another great day.

We weren't too far out of the meadows when we had to pull to the side for an RV coming the other way. The driver definitely looked concerned. We spent the rest of the trail wondering how far he'd gotten, and how it was even possible. That was probably a scary trip.

We headed into the trees and started climbing, and it was beautiful. The sky was a clear blue and everything was very green. There was a sign noting that the Blue Mesa 4-Wheelers maintained the trail, and it looked like they had done a lot of work on it. It was in really great shape.

There was a spot at a creek crossing where we turned left instead of right, but it quickly took us to a big parking area for a hiking trail. We got back to the correct trail and then it got fun. There were some rocky spots, and some sections of rock that looked like slickrock if you squinted and didn't look too closely. We were missing Moab.

We stopped at a fairly messed up bridge to let some trucks get by us and to take a little break. It was a nice camp spot. It wasn't too far down the trail from there that we came to the first of the many switchbacks that would take us to the pass.

We all noticed how quickly we were climbing. The elevation change was pretty drastic, and we soon found ourselves at timberline. Large portions of the trail were exposed as they traveled across scree. We all like the sound those loose rocks make under our tires.

Then there were some festive surprises! We found rocky switchbacks and sections full of fun stuff. There was even a set of ledges that we all enjoyed. The climb was really fun, and we were really glad we were running it from Crested Butte to Aspen. We were a bit bummed when the festivities ended.

We got to a wide spot where there was a lot of parking. It was before the pass and well above the trees. We thought we could see the pass from there, but it turned out it was just a curve in the last stretch of trail before the pass. It was scenic so we got out to take pictures. It seemed like we could walk to an edge for a big view, but the edge wasn't really an edge. Still, Bob had fun doing his best impression of the montage from Little House on the Prairie. Yippee! Three of us even took a simultaneous movie by slowly spinning in a group. It must have been a lack of oxygen.

We hung out for a while but then it was time to get to the pass. The road there was narrow and even tippy in spots. It was a little intimidating but it was so pretty.

It was lunch time so we decided to eat at the pass. We managed to park our four Jeeps up there with plenty of room for others to pass us. It was so steep for Monica and Walt that they couldn't get anything out of their tailgates, so they had to get creative with seating. It was a gorgeous lunch spot in the sun. We met lots of people while we were there, too.

We were happy to see only patches of snow to the sides of the trail on the other side. We headed down the scree and across the rocks. It was like driving on another planet, and it was pretty cool.

We ran across many more vehicles on this side of the pass. We never had any issues with passing, but that was largely due to luck. We stopped at one of the switchbacks for a little break, but then pushed on.

Our next stop was at the Castle Creek bridge. We all love waterfalls and mountain streams, and there were a lot of photo opportunities. We saw quite a few hikers and runners while we were there. Bob even got in some posing on big rocks just before we got there. Life was good.

The rest of the trail was fairly uneventful. There were lots of people out enjoying that end of the trail, and lots of people parked at the end. We worked our way down a bit of the pavement to stop at the rest area there and regroup. Ben decided it was time to head for home, so he left us there. The rest of us headed for Taylor Pass to squeeze in a couple more trails. Of course! 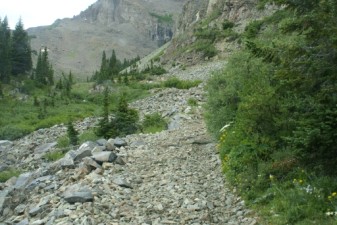 Led by Mike S.
We came down Annie Basin and Castle Creek Road, and we started on the north end of Pearl Pass with sun shining in a clear sky. Due to a lot of spring and early summer runoff the creek was running a bit high, so the first water crossing was a…
Join Us!
If you aren’t a Member or Subscriber, you can’t see all of the content on this site. Get membership information to see why this site is best when you join and log in