We'd already done Blue Mesa Cutoff and Alpine Plateau, but Owl Creek Pass was the one we were really looking forward to. It only added a few miles to our trip, cutting off the corner of highway where Montrose sat. But it would add quite a bit of time, so we hurried to get started. We were already aired down, so we headed south on the trail.

Naturally, it started by weaving through a residential area. The views of High Mesa to the left of the trail were pretty impressive. We had just been up there, on Alpine Plateau. Cool!

The houses were nice, nestled in the trees. There were very intricate irrigation ditches that we all noted. However, it wasn't long before houses gave way to open space. There were some pretty nice campgrounds along the way.

We could see Cimarron Ridge in the distance as we approached it. As we got closer, we noticed that it was very different. We couldn't take our eyes off of it. It's almost like a connected collection of spires, all in lines. The mountain climbing in this area must be very interesting and fun.

We passed by the side trip to Silver Jack Reservoir. We had to get to Silverton soon in order to check in to our hotels, so we couldn't take the time. We'd have to check it out another day.

Just after the intersection, we saw a nice turnoff with lots of parking, and the views were awesome. We stopped to take pictures of the crazy mountains around us. Then we figured we'd just stop there for dinner. We had eaten lunch in Gunnison at a restaurant instead of on the trail, so everyone still had a meal in their cooler. We turned it into dinner instead.

The views there were mesmerizing. We also saw some deer and plenty of cows. This ended up being a great place for dinner.

After dinner, we kept going south. That brought us closer to Chimney Rock and Courthouse Mountain, and both were very impressive. Soon, the trail turned west at Owl Creek Pass and we headed down.

The switchbacks were pretty mellow, but there were lots of them. The trail had been dusty and we were headed right into the sun, so visiblity wasn't that good. We did catch a nice view of the valley below us, and we quickly stopped for pictures.

Just after that, we followed a sign to Vista Point. We figured the views of the valley would be good from there, but all you could see were trees. Maybe there is a hiking trail to a better view? We didn't know, but didn't have time to explore it any further. We'll have to check that out next time.

When the switchbacks stopped, the houses started. It was all residential, and busy. There wasn't anywhere to pull off and air down, so we had to go a little way down the highway to find a wide enough shoulder for airing up. We finished as the sun was setting, providing dinner for the mosquitoes.

We went through Ridgeway and Ouray, finally getting to Silverton with mere minutes to spare. But we did get there in time to check in. Our rooms were all very nice. Walt and Georgina stayed at the Canyon View Motel and the rest of us stayed at the Villa Dallavalle Inn. We were all exhausted and covered in dirt, but it was a great day of exploring. The scenery from Owl Creek Pass was definitely something we'd want to see again. 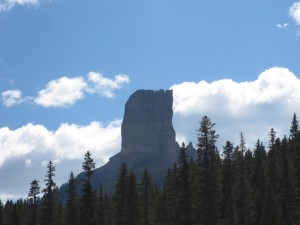 Led by Roger R.
We were driving from Denver to Ouray, and we stopped for lunch at a great BBQ place in Gunnison along the way to the trail. In our haste to get to the Owl Creek Pass trailhead we forgot to gas up before leaving town. So we had to venture a…
Join Us!
If you aren’t a Member or Subscriber, you can’t see all of the content on this site. Get membership information to see why this site is best when you join and log in