We had completed Bullion King Lake and Red Mountain Pass, and Ophir Pass was only a short jaunt down Highway 550. The weather had changed from bleak and dreary to nearly perfect, and we were looking forward to a mellow and scenic drive. There were no people near the trailhead and we only met a couple of other vehicles during the rest of the trip to the summit. The trip to the summit was uneventful, relatively quick and quite scenic.

Once past the summit, the trail quickly turned into a shelf road that was very narrow. After the first set of switchbacks, we noticed a lone vehicle coming up so we pulled over at the only wide spot in the road and waited for the vehicle to pass. In the meantime we observed a furry little pika playing on a large rock right in front of us. The occupants of the vehicle were very appreciative that we had waited, and once we headed down the trail we understood why -- there was simply no place for vehicles to pass for quite a distance.

It was tough to keep our eyes on the road while we descended, but it was a pretty narrow trail with a big drop-off. We did our best to pay attention, and we made it through just fine. Crystal Lake was splendid in the bright sunlight.

We went into the trees, and the trail suddenly changed. It was shady, and everything was yellow and green. It was definitely a different feeling.

Just prior to the town of Ophir we found an ideal lunch spot and had a leisurely lunch. The fall colors were brilliant, and it could not have had a better spot for lunch. We hated to pack up and leave but we still had a couple more trails scheduled for the day.

The little town of Ophir was very quaint. We noticed that the town was all residential, with no businesses. The houses were relatively new, and the trail had numerous speed bumps. The Ophir post office was a little shack with barely enough room for a stool and work table. At least they had a post office.

When we got to the pavement, we turned north to go to Alta Lakes. Ophir Pass isn't just a way to get over to the other side -- it's worth the trip. 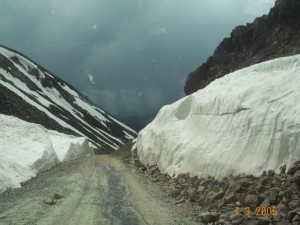 Led by Evan B.
We had originally tried Imogene Pass but it was impassable due to snow blocking the road. We stopped in Silverton for lunch and saw a sign for Ophir Pass there. We asked in town and found out that the trail over the pass had been plowed and was open. So,…
Join Us!
If you aren’t a Member or Subscriber, you can’t see all of the content on this site. Get membership information to see why this site is best when you join and log in