We went up to Storm Mountain first, but found the gate locked at the trailhead. We backtracked and tried Old Flowers Road next, hoping to take the easy trail on the way to Kelly Flats. It wasn't going to be that easy, of course.

We rolled through the residential area and talked with a local on a tractor at one of the gates. He said that the trail was open the whole way. It was good news, and we headed on to the final gate to air down.

We had lunch there, and though there were lots of flies they weren't biting. It wasn't long before we got going again.

We enjoyed the trail -- it was really, really green. The big snows over the winter had really changed the area. The aspens were gorgeous, and every surface had some green plant on it.

The mud puddle was big, but not too big. Don got in it first, finding that 4-wheel drive was in order. Bill, Mike, Ladd and Walt followed and everyone got a little muddy, but no one felt like really playing in it.

The sun was shining and we ended up parking for a bit at the cabin, just to stretch our legs. It would have been a nice place to stay when it was still nice, because the views were fantastic.

We kept going, and we passed a family with a truck and some bicycles. The driver told Mike that there were trees blocking the trail. First there were two, then at least 20 more after that. We kept going to see how bad it would be.

The two trees covering the trail were big, and they stretched pretty far on either side. We had hatchets and a little saw, but it would take us awhile to get through those trees. If there really were 20 more, we'd be here all day. After a little discussion we knew we had to turn back.

We tried a spur that went north, but it eventually came to a dead end. We went back to Old Flowers Road and then back out the way we came in. We told quite a few people about the fallen trees on our way out, as they were heading in.

We went and did Kelly Flats, then decided to do the other side of Old Flowers Road just to see the whole thing. The other end of the trail was largely big pine trees, and it wasn't as scenic as the eastern half. We saw a few, small trees that had been blocking the trail, but someone had cut through them to get through the trail. Our hopes were that they cut through the big trees, too.

When we got to the big trees (on the other side) we found that someone had used a saw to cut through them, and we could now get through the trail. It turned out that those were the only two big trees blocking the trail. Had we known that, we probably would have cut through them and kept going earlier in the day.

We went out to the trailhead, meaning we saw the cabin three times and went through the mud three times. We definitely worked hard to do Old Flowers Road, and it ended up being a lot of fun. 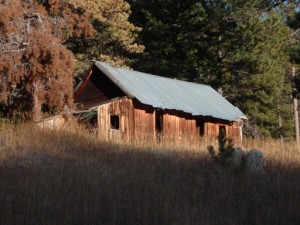 Led by Mike S.
We had just finished Monument Gulch, and it ended right at the west end of Old Flowers Road. That was great because the sun was starting to get low in the sky. With the sun at our backs we headed up the steep incline to start our fourth and final…
Join Us!
If you aren’t a Member or Subscriber, you can’t see all of the content on this site. Get membership information to see why this site is best when you join and log in