We're spending this season revisiting trails from our distant past as well as exploring new trails. This Saturday promised to be a little of both. We hadn't been on North Supply Creek in seven years, so it was definitely time to see what was new. Much to our surprise, the trail was a bit more difficult.

The first of the difficulties came when we all tried to find the trailhead. Access to the trailhead had changed since we were there last, but at least it was amusing. Marcus was meeting us at the trailhead so he beat the rest of us there, and we yelled across a fence at each other. We asked him how he got there and he told us. We were already lost.

Matt P. was there, but he was driving Chuck's Jeep so he couldn't join us just yet. He was gathering information for the next FunTreks book, so he was just along for the ride. He didn't mind.

It wasn't too much longer before we were all together, airing down at the trailhead. Quite a few ATVs came roaring off of the trail as we were preparing, and it seemed like there were lots of people in the area. It was almost like there was a festival there or something, there were so many campers and people renting ATVs and horses. It was pretty crazy.

Luckily, we got on the trail and the madness ceased. We saw quite a few ATVs over the course of the day, but it wasn't too bad. We were soon climbing up the trail.

The whole area was really devastated by trees killed by pine beetles. When we looked out over the valley it almost seemed like more than half of the trees were dead. Once we got on the trail, we found that they were taking care of it. Many dead trees had been cut down and into smaller pieces, stacked up in piles. Some piles were gone. Some piles were burned. It was messy, but it had to be like that.

We got to the "Y" in the road and took the south fork. We crossed Kawuneeche Road and kept going, and it wasn't long at all before we were at the parking area at the end. We stopped for a bit to stretch our legs, but we didn't stop for long. The mosquitoes were out in full force.

After regrouping, we headed back to the "Y" and turned left to do the north fork. This one was a bit rockier, and it seemed that the further we went the rockier it got. It stayed within a "3" rating for quite awhile, but then it suddenly turned to a "4" and everyone was pleasantly surprised.

The hill climb really was fun. The rocks were bigger and most of them were loose. We found a wide spot with flat area in the shade, and it looked like the perfect lunch spot. It was noon, so we stopped. Lunch was really nice.

We kept going all the way to the top. The trail didn't stay difficult for much longer, but it was still a nice climb. Some sections were even narrow between trees.

At the top, the view was mostly obstructed by trees. Still, it was nice there and we hung out for a bit. The mosquitoes were at it again, though, so we soon headed back down.

When we got to the top of Kawuneeche Road we turned there and took that trail out. North Supply Creek ended up being a nice surprise! 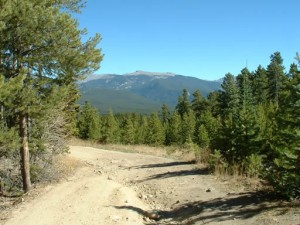 Led by Monica I.
We started the trail at about 11:30 in the morning and reached the top in about an hour and a half. The trail is rocky but it doesn’t have any major obstacles or areas of difficulty. The most difficult part seemed to be finding our way. It would probably be…
Join Us!
If you aren’t a Member or Subscriber, you can’t see all of the content on this site. Get membership information to see why this site is best when you join and log in