Saran Wrap and Eagle Rock are two of our favorite trails, but sometimes they can get busy with lots of 4x4 traffic. We've explored a few of the other trails in the area but we wanted to add another one to our list. We met at the Home Depot in Colorado Springs and headed up to check out Mount Rosa.

We were climbing up Gold Camp Road when Monica's Jeep started overheating. We pulled off to the side to let it cool down, eventually pouring water on the radiator. She wouldn't be the only one with her Jeep in the shop in the following week, as Mike's Jeep had a transmission acting up. It's always something.

We found the trailhead easily enough. It's the first big trail that leads north off of the main road. It headed into the trees and didn't leave them very often.

The overlook was nice, and it was the first place we stopped. We checked out the views and enjoyed the little break. You could see down into Colorado Springs and it was really pretty. We noted the clouds rolling in and wondered if we'd have time to make it to the end of the trail for lunch. We decided to press on and risk it.

The campsite next to the hiking trail to the top of Mount Rosa would be nice if you were able to grab it before anyone else did. With the weather as it had been for the last day or two it wasn't surprising to not see any hikers. We'd had some pretty busy thunderstorms lately. Springtime in the Rockies!

After the hiking trail we started up the hills. They were pretty easy but fun. The trail would level off and then we'd head up yet another hill.

The trail ended while it was still in the trees. We parked on the hill in a wide area and set up chairs for lunch at the bottom of the hill. We weren't eating for long before it started sprinkling a little bit. We didn't hurry to pack up our lunches but we didn't hang out for very long. We soon turned around and started heading back down.

Before we left, we checked out the Wye Campground near the trailhead. It's one of the only places near Colorado Springs where you can camp in a developed campground for free, so we expected to find it pretty full. We only found one car there, though, which was odd. It would be a great place to set up home base if we ever stayed in the area.

We had five Jeeps but it would get cut down to three Jeeps for the next trail. Roger felt something odd so he pulled over to check soon after we started the next trail. He found the mount for his rear upper control arm broken completely in half, and that was also where the rear track bar mounted. It made for a squirrely ride, and he was done for the day. Mike followed him home and he got home safely by using a lot of ratchet straps and going slowly. There's another Jeep in the shop! 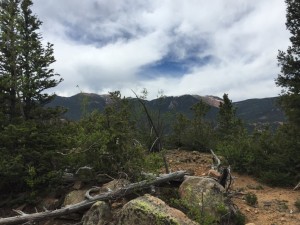 Led by Matt K.
Mount Rosa was the last trail for the day. From the start, it was an easy trail up to the look-out spot. It was a great view. The only issue we had was that people were shooting at the start of the trail and did not stop shooting as we…
Join Us!
If you aren’t a Member or Subscriber, you can’t see all of the content on this site. Get membership information to see why this site is best when you join and log in