Mount Baldy was the second and last trail for the day.  Matt came off of a fun trip up Eagle Rock, testing his new coilovers that were working really well.

This time on the trail, he stopped at the top of mountain and they walked down to the old dam, which they had not done in a long time.  The reservoir behind the dam was drained so you could just see a small stream going up and through the dam.  They had a good time walking around the dam and checking things out.

When they were done exploring, Matt made his way back down to the start of the trail.  He did not have any issues with Mount Baldy, and it turned out to be a great day. 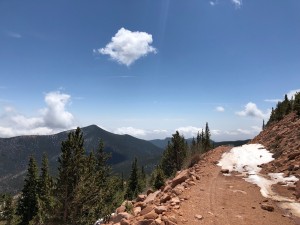