Trail Run on May 23, 2010
Report and photos by Monica I., Trail Leader
View trail information for Moab Rim

We were all heading back for home that day, but three of us decided to do a run on Moab Rim on the way home. We didn't really get out of town on time and we didn't hurry on the trail, so it took a bit longer than expected. Also, massive winds had put so much dirt in the air that it looked very hazy. Still, it was well worth it.

There were a few Jeeps in the parking area when we got there, but they waved us through when we were ready to go. They would be behind us on the way up, though with plenty of distance between our groups. They went back down after the first overlook so we didn't see them again after that.

Everyone had their own approach to the Devils Crack. Roger spun his way to the top followed by Andrew and then Bob. No one had any issues.

The small set of stairs just after Devils Crack is sneaky. It looks easy, but it's set on a serious tilt. It's the one obstacle to really mess with your head. Everyone noticed that about halfway through it.

We all enjoyed the climbs and descents on slickrock on our way up. They all seem so minor, but with the whole trail at a slant they all get a little more difficult. That coupled with the fact that the edge of the rock is very nearby makes it daunting in places. It's definitely a unique trail because of that.

The close-up views of the river below weren't as close when we got to the Z Turn. Everyone got out to plan their line, but the obstacle had gotten quite a bit wider. Posts and cable had been put up to keep people out of the sand, but the rest of the slickrock was up for negotiation.

Roger went up first, following his planned line perfectly. The top of the Z Turn looks like it's the easy part, but it really isn't. Roger didn't have to work on it too much, though, and soon he was through the obstacle.

Andrew went next, making the bottom half look really easy. But even he had issues on the top half before finding the line that worked for him.

Bob sailed right through the bottom part but also had issues at the top. He ended up frustrated with it and gave it more gas pedal, bouncing in the air all the way to the top of the final stairs. It was very dramatic!

After the Z Turn, there were many little rocky sections to negotiate. Then the slickrock hill got very steep. There was one last ledge and then we were done with our climb and parked at the first overlook.

It was windy and it had been windy for a couple of days. Today, the wind was really gusting. It had raised all of the dirt and dust into the air and the entire Moab valley was in a haze. It prevented us from seeing the usual amazing views from Moab Rim, but the views were still impressive. We hung out for a little bit but soon we pressed on.

When we got to the crossroads we took the right side of the "Y" intersection. That took us through some fun slickrock sections that everyone enjoyed. It also took us up to the big, optional dome. Everyone opted to drive right over the top of it.

It's a scary dome, because it wouldn't be difficult to give it gas at the wrong time, toss your front end up in the air, and go end over end for a long time. Luckily, no one did that and we all made it gracefully up and over the top.

We eventually made it to the second overlook, where the wind was really out of control. No one wanted to get too close to the edge, and each of us got tossed a little closer to it at least once when a gust of wind hit our backs. We quickly ate a little bit of lunch and then turned around to head back.

On the way back, we took the other section of the trail through the sand. It was pretty fun. All three of us tried to drive up the sand hill but no one made it even halfway up. Andrew made it the farthest, though Bob was a close second. No one opted to play on the sand hills for very long, though. We vowed to come back another time when we had more time to play.

When we were back to the first overlook, both Andrew and Bob spent some time tightening loose bolts for the drive home. They were both happy with the results. Highway driving in a lifted Jeep is tough enough without loose components.

The trip down may be even more intimidating than the trip up the mile of slickrock. The Z Turn didn't give anyone any trouble, which was good.

When we got to Devils Crack we planned the route to keep us the most level. If the obstacle was on flat ground, the line we chose wouldn't make much sense. But on the Moab Rim trail it worked perfectly. No one leaned toward the edge and everyone made it down without hitting bumpers on anything.

After that, we were soon down to the parking area. Everyone aired up and we were on our way. Andrew stayed another night in Moab while Bob and Roger headed out of town. It was the perfect way to wrap up a really great week in Moab. 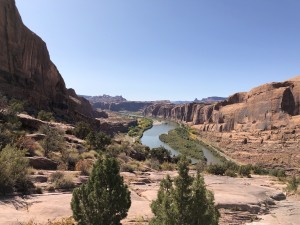