We took the side trip off of Yankee Hill to do Miners Gulch, but we did it in a weird way. We wanted to see all of Yankee Hill, including the part between the start and end of Miners Gulch. So, we started at the eastern end, did Miners Hill, then did the whole Miners Gulch trail from west to east. It probably wasn't the best decision, as this is where all of the people were.

We had the beginning of Miners Gulch to ourselves. It was easy going, and we soon came to Miners Hill. We couldn't remember how steep it was, but it wasn't bad. It opened up at one point, and we stopped to get out and enjoy the scenery. The weather was perfect, so we took our time.

It seemed like a good idea to do the trail in reverse, but it wasn't. For one thing, that meant we did the hill in the downhill direction, making it much easier and not as much fun. For another thing, everyone else does it in the opposite direction. We ran into multiple groups of dirtbikes and ATVs, and it was kind of a mess at times. Lesson learned!

Just past the open spot at the bottom of the rocky hill, we took the spur over to the campsite. It was the perfect place for lunch, and we didn't see anyone else over there. We took our time just hanging out and enjoying ourselves.

We finally had to pack up and go, doing the rest of the trail in the opposite direction. We got lucky and didn't see anyone else on the way out. It's a fairly uneventful trail. It was the only place where everyone was quiet, just driving. Still, the weather was absolutely perfect.

When we were done, we lined up all of the Jeeps at the huge intersection at the trailhead for some group photos. Perfect! Then we headed west on Yankee Hill and to the rest of our day. 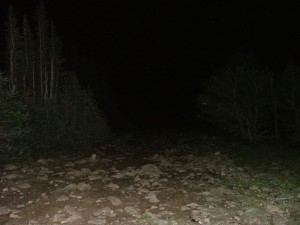 Led by Monica I.
We were headed up to Yankee Hill to watch the meteor shower, so it was pretty dark. We didn’t get any pictures worth showing off, but it was still fun. We all headed down the trail and then turned up to do Miners Hill. It was a blast in the…
Join Us!
If you aren’t a Member or Subscriber, you can’t see all of the content on this site. Get membership information to see why this site is best when you join and log in