We started the trail and ended up a little surprised to find it a little rocky in places. You could definitely find your way around the rockier sections and make it fairly easy if you wanted. Of course most of us took the rockiest lines. There was one part with a large rock in the middle that none of us could get over (though Monica managed to fall over it on the way down).

We went to Poughkeepsie Gulch and took that trail, picking up with Mineral Creek again after getting to Animas Forks by way of California Gulch. We ran a little bit of Cinnamon Pass (from Animas Forks to the summit and back), but it wasn't long enough to see much of that trail. We'll run it next time.

Then we ran just a bit of Engineer Pass. We only ran this trail up to Oh Point because by that point visibility was at about 15 or 20 feet. When we got to Oh Point it was so foggy and cloudy you couldn't see very far. It was 48 degrees and raining. It was a little creepy and we really missed out on the big view from up there. Again -- next time!

We came back down and followed Mineral Creek back out. We stopped to explore the Mineral Point trails and had a really good time just running around the network of trails. The San Juan Chief Mill itself is huge and falling down so we weren't able to explore it, but it was really cool to see. The cabin next to it was obviously being maintained and it was in great shape.

While we were coming back down the trails in Mineral Point to intersect with Mineral Creek we found a really big puddle. There were puddles all over the trails because of all of the rain but this one was massive. It turned out to be really thick at the bottom, and Bob got himself nice and stuck right in the middle. He rocked back and forth and worked on it and managed to work himself out of the mud without a tow strap. Nice driving! After that warning no one else went through (we could go through smaller mud puddles around it without going off the trail but the mud was unavoidable).

The trail was just as much fun coming down and we made it back to the trailhead before sundown. Some people went to the Hot Springs while other people went to the campground or to their hotel. It was a very long and very fun day! 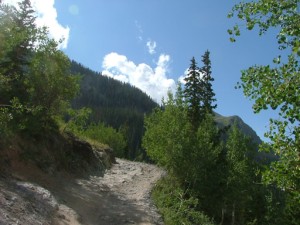 Led by Monica I.
Mineral Creek is definitely a fun trail, but doing it first thing on a Saturday morning in August meant there was lots of traffic. We shared the trail with vehicles and ATVs going both directions, and many of the drivers were in a bit over their heads. Still, we had…
Join Us!
If you aren’t a Member or Subscriber, you can’t see all of the content on this site. Get membership information to see why this site is best when you join and log in