Mill Creek is always a fun loop, and it's fun in either direction.  We decided to run it in the clockwise direction so we'd have more of the obstacles in the uphill direction than the downhill direction.  It ended up being a good choice.  It was only mid-morning when we came off of Red Elephant Hill, and we'd never been on Mill Creek that early before.  With only two Jeeps, it was a pretty quick trip.

It was one of those Colorado days that makes us all feel so lucky to live here.  The temperature was perfect, and we were looking at healthy green trees under a blue sky with a few puffy, white clouds.  It didn't even look real sometimes.  We took a lot of photos.

The creek was clear and we were soon on the other side, climbing up the rocky hill.  Then the rocky sections just kept coming.  Though there aren't any big obstacles, we had fun choosing the toughest lines through the rocks.

When we got to the Empire Hilton it wasn't noon yet, but it's a great place for lunch so we stopped there.  We explored in and around the cabin first, marveling that anyone would stay there.  It had lots of provisions this time, and lots of places to sleep if you're desperate.  We didn't touch anything.

We set up our chairs for lunch and chatted with a hiker walking by.  It was a pretty quiet day considering it was a perfect Saturday.  We expected lots of other people, but the trails were relatively empty.  We still hadn't seen anyone.

We packed up to head out, and saw a few other vehicles a bit later in the trail.  There was someone standing on a rock at the second creek crossing, another hiker.  Then we were out of the trail.

It was getting later so we headed over to Bill Moore Lake to meet Sean. 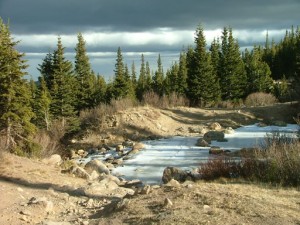