Middle St. Vrain was the second trail of the day after we finished visiting the T-33A plane crash. On the way to the trailhead, we looked for Brian in the parking lot and camping areas but there was no sign of him. He was driving a couple girls home to get keys who had locked theirs in their car, and we weren't really expecting him back yet. So, Alan his son suggested we should just proceed and maybe we would run into him along the way. But we didn’t have any luck finding Brian on the trail.

We got in front of a bigger group of trucks that was getting ready to run Middle St. Vrain, like us. It was lucky -- we'd been tied up behind groups many times on this trail.

The first rock pile at the start was no problem for us, just some fun.

The rock obstacle was fun! Matt and Alan climbed up on the big rock to flex out and Calvin went around the big rock, as he had just been on this trail a few days before.

We kept going and first turned took the right turn at the "Y" intersection to finish Middle St. Vrain. At the end of the trail, we stopped to have lunch. Then after lunch, we returned to the "Y" to take the other turn to tackle Coney Flats. 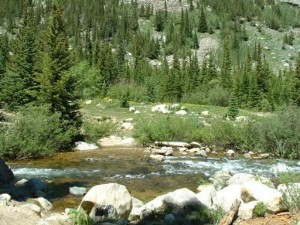