Kendall was the only one who had run this trail before the Hayman Fire, and he said it looked vastly different after the fire. We were all excited to see the trail because it had just recently reopened.

We ran the top portion of Cedar Mountain Road first, and then started in on Metberry Gulch. It had good signage at the start of the trail as well as a seasonal gate. Almost immediately, there was a small water crossing filled with logs as well as a small bridge to cross. You could really see the work that the volunteers had done to get the trail open.

The first half of the trail was easy. It was very scenic and somehow beautiful even though it was badly burned. There were lots of yellow aspen trees claiming the space between the tall, black, burned pine trees. It was definitely a unique sight.

We were thinking that Cedar Mountain Road might be the more difficult trail, but then we came to the rocky section. We found a couple of trucks working their way up the trail, but there was plenty of passing room here. It looked like it was going to be fun on the way up.

It wasn't long before the trail started to really turn downhill. There were big cracks in the road, and some portions were a little tippy. We didn't need 4-wheel drive because it was such a big descent, but we were all thinking we'd need it on the way up.

The Rock Slab was fun, even on the way down. We all slid down the top half because it was covered in sand, and then finally gripped our tires on the bottom half. The hill just kept going.

We soon got to the bottom and found another group of vehicles as well as parked ATVs and dirt bikes. The vehicle group finished their lunches and headed up while we were getting ours organized. We had a fabulous lunch under huge, unburned pine trees. The views of the South Platte River were very nice.

There were a couple of people fly fishing in the river, and it was very relaxing to watch. We definitely didn't hurry our lunch. Soon enough, though, it was time to go.

The climb needed the lower gearing of 4Low right away, it seemed. It's definitely a steep climb. The Rock Slab was actually pretty easy as long as you didn't spin your tires in the sand.

We really had a great time on the way out. The last bit of rocks were fun, especially for Kendall as he slid around.

When we got to the trailhead again, Kendall left us and headed back out the way we came in. The rest of us headed out to check out Phantom Creek. Metberry Gulch was a blast, and we'll definitely do it many more times -- especially after the other two trails open again. 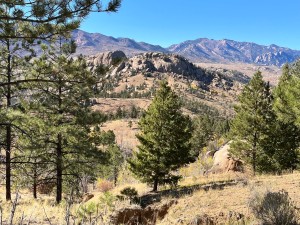