Mammoth Gulch is a weird and cool trail. One side goes to nowhere while the other side goes to the site of a reservoir that was drained many years ago. It's worth checking out, and we were in the area. We came off of Kingston Peak and headed down the trail after passing a few people who had parked in the middle of the trail.

The camping side was uneventful. The other side had many puddles from a rain the night before. We saw a few people camping, and when we got to the parking lot near the old reservoir we found a few cars there already.

The weather was perfect, and it made the valley light up. The recent rains had kept things very green for late August, and the valley was very lush. Walt told us about the time he drove around the reservoir before they drained it. It's weird to still see it on the GPS.

Some people started shooting not very far away from us so we packed up and left. It's a short trail, but the view at the end of the drained reservoir is worth the trip. 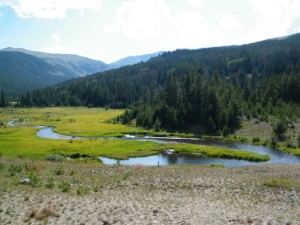 Led by Monica I.
It’s hard to believe that Mammoth Gulch hasn’t been on TrailDamage.com until now. We’ve all been in the area so many times, but we never took the time to really document the trail. It was a short trip, and most of it was worth it. There were people camping in…
Join Us!
If you aren’t a Member or Subscriber, you can’t see all of the content on this site. Get membership information to see why this site is best when you join and log in