The weather started out pretty nasty in the morning, but it was early in the afternoon and the skies were blue with puffy clouds.  We had a quick discussion and decided to continue our day by heading over to Lost Canyon.  We were already aired down, so we headed straight up the hill at the trailhead.

The photos were "Windows XP wallpapers" all the way to the end.  The trail climbs pretty quickly, and it was already pretty chilly when we had our first stop at the cabin.  There was someone there with a drone in the air, so we didn't stop for long.

All of the mining that was done in that area meant there were lots of remnants to see.  It looked like one was still in operations, though we didn't go down the spur to check it out.  Our first photo opportunity was really at Overlook 1.  Most of us got out of our vehicles to take pictures of the Twin Lakes Reservoir below us, but it was really windy and chilly.  It's a great view of Twin Lakes, though, so the photos were worth it.

Overlook 2 is the fun one, of course, with the best views.  We cruised up the hill, even getting a little tippy as we crossed it near the top.  We found fun places to park and pose on rocks, and we had it to ourselves for most of the time we were up there.

It's definitely worth walking around the top, even in the wind.  There is a spot with an outcropping of rocks that act as a bit of a windbreak, and we all took turns going out to the farthest rock to enjoy the view.  The drop off into Boswell Gulch was pretty crazy and steep.  We stayed up at that overlook for a while just enjoying the big views.  It really felt like winter was on its way, though.

We headed down to the big cabin near the Columbine Mine to enjoy some time out of the crazy wind we were just in.  We'd passed a guy on a bicycle earlier, and he made it to the cabin while we were there.  The trail has a pretty big elevation gain, so making it to the cabin is pretty impressive.  He took a break and then headed down, and we never caught up with him.

We went out to Overlook 3 and passed some people who'd put up a tent in the massive and cold winds near the edge of a cliff.  Admittedly, it was a pretty awesome place to camp but it must have been miserable overnight.  They were hanging out in their vehicle, and we imagined it was just to get out of the wind.  We'd find better places to camp if we were them.

Overlook 3 is probably the least impressive overlook, and when we got there we circled and no one wanted to get out.  We just took photos from vehicles.

We soon headed back down, and the trip was a quick one.  When we got to Flume Creek we still had the time and motivation to do one more trail, so we turned in. 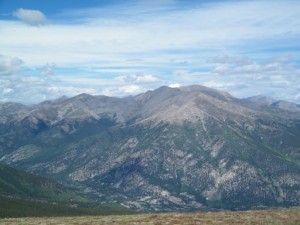 Led by Monica I.
It’s definitely not a short drive from Denver to Lost Canyon, but it’s worth it. The drive from I-70 through Leadville to Granite is a pretty one. We’d been to Lost Canyon before, so this time the trailhead wasn’t such a surprise. Having the GPS track ahead of time really…
Join Us!
If you aren’t a Member or Subscriber, you can’t see all of the content on this site. Get membership information to see why this site is best when you join and log in