We've always enjoyed Loch Lomond, and we were in the area with time to spare so we headed over to do the trail after Kingston Peak.  Even with the fire ban, the trail was pretty crowded with campers and people enjoying the trail.  We saw lots of cars, too, with people driving them like they were on a smooth, dirt road.  We pulled off for a bit to let some of the traffic pass us along the way.

We bounced up the trail and soon found ourselves at the end, at the lake.  It was packed, with cars and trucks everywhere.  There were people fishing and camping, and someone even had a fire going.  It had been raining all day, though, so nothing bad would come of it.

We weren't sure where to park, and then saw an open spot where we could all fit.  We got out to enjoy the low-hanging clouds making some great scenery over the lake.  Still, there were lots of people everywhere and it was raining, so nothing really encouraged us to stay long.

We decided to head out, so we weren't on the trail long.  There were still vehicles and people pouring in, and we were in a long line of slow-moving cars working their way out.  We wondered why there were so many street vehicles out there.  It was like there was an article about it, and everyone came out to see it for themselves.

We aired up next to the pavement and then headed into Idaho Springs.  We ate at the Buffalo Restaurant, which ended up being really good.  It wasn't raining at that point, and we had a good dinner and a good trip back to Denver.  It was a great day, even with the rain and chilly temperatures. 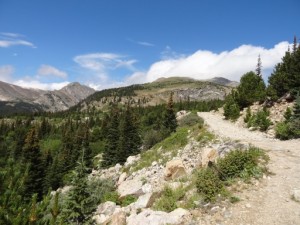 Led by Monica I.
How had it been so long since we saw Loch Lomond? Time flies when you’re having fun, and we’ve been having lots of fun. In our constant search for new trails we tend to neglect the old favorites, and it was time to see the lake again. We came off…
Join Us!
If you aren’t a Member or Subscriber, you can’t see all of the content on this site. Get membership information to see why this site is best when you join and log in