We spent the night at the Airport Campground on the White Rim trail, a spot very close to the trailhead for Lathrop Canyon. That meant we were descending into the canyon first thing in the morning. The temperatures were nice but it promised to be hot during the main part of the day.

The initial descent is fun and steep. Part of it was washed out a bit and it would have been challenging for a stock SUV. We didn't have any issues, though.

We followed the trail as it weaved back and forth through the canyon. At times, the walls were close. It was definitely scenic, and there were some nice, shady spots along the way.

It was a sandy and mellow trip until just before the end when we went into some green brush and trees. It was a short section, but it touched our vehicles in spots. We popped out on the other side right next to the water. There was plenty of room for us to park in a circle.

We all got out to stand next to the water and take in the gorgeous scenery. A large group of rafters had camped across the water and it looked like they were getting ready to start their day. It was a nice setup.

We hung out on the picnic tables in shade for a little bit, but we knew we had a long day ahead of us on White Rim so we didn't stay too long. Walt broke out the peppers so we snacked for a bit, and then we headed back out.

The ascent back up to White Rim wasn't long but it was a good time. We got off the trail and agreed that it was well worth the trip. Even if we were only doing Shafer Trail and not all of White Rim, it would be a good side trip to come down to Lathrop Canyon in the future. 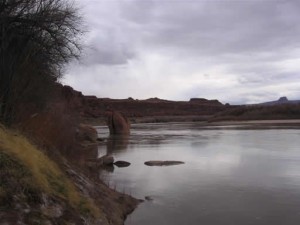 Led by Ladd G.
Lathrop Canyon is an optional side trail off of White Rim. We planned on hitting as many of the trails as possible in the Canyonlands National Park, and Lathrop Canyon was a good one to take to view the Colorado River. We planned to have lunch at the trail end….
Join Us!
If you aren’t a Member or Subscriber, you can’t see all of the content on this site. Get membership information to see why this site is best when you join and log in