Trail Run on May 15, 2016
Report and photos by Monica I., Trail Leader
View trail information for Lands End

In a round of deja vu we found ourselves back on the Lands End trail. This time, we got to the four-way intersection by doing the Poison Springs Canyon trail first, so we skipped the less challenging portion of Lands End. That left the best parts for us to do.

We headed north and found the eastern side of the Orange Cliffs trail. The other side ended at Sunset Pass, where we just were. We would need to do that one someday. Then we were heading up the hill again.

The views were still spectacular, though we didn't stop a lot like we did the first time. That meant that this trip on Lands End went by much more quickly than it did the day before. We cruised along at a nice pace, didn't see anyone else on the trail, and soon found ourselves at the bottom of Flint Trail again. 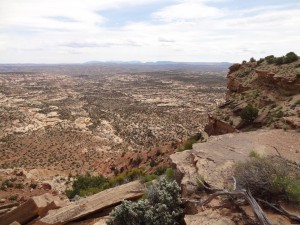 Led by Monica I.
Cove Canyon was a nice trail, but we knew that Lands End would take us deeper into The Maze and Glen Canyon so we were really looking forward to it. The start of the trail was easy and maintained as we headed around Fault Point and the Tar Cliff, heading…
Join Us!
If you aren’t a Member or Subscriber, you can’t see all of the content on this site. Get membership information to see why this site is best when you join and log in