Trail Run on May 14, 2016
Report and photos by Monica I., Trail Leader
View trail information for Lands End

Cove Canyon was a nice trail, but we knew that Lands End would take us deeper into The Maze and Glen Canyon so we were really looking forward to it. The start of the trail was easy and maintained as we headed around Fault Point and the Tar Cliff, heading north.

A sign noted that we were heading into the Orange Cliff Unit of Glen Canyon, and that all off-highway vehicles (OHVs) were prohibited. Then we were in Waterhole Flat and came to the big 4-way intersection. Poison Springs Canyon was to our left, and the Land of Standing Rocks was to our right. Two Jeeps came off of that trail and we chatted with them for a bit. They had spent a couple days at the Dollhouse and it sounded like a great time. We hoped to see both of those trails on the following day, so we continued on to do the rest of Lands End.

We found a wide and flat spot with a bit of shade just before the hill climb up toward Lands End itself, so we stopped for lunch there. It was definitely hot, and like every spring trip to Utah there were people who didn't pack their camp chairs. Lunch was nice and we saw a couple vehicles passing us and going the other way, and then we packed up to keep going.

The hill climb up Lands End is a fun one, but not very long. Then we were halfway up the side of the tall mesa and at a place where we could look at the land below us. Teapot Rock was just south of where we were, and we knew htat Cataract Canyon wasn't too far to the east, but we couldn't see the water.

After the hill, the trail is colorful and fun as it snakes around the Orange Cliffs. We came to the intersection with the Flint Trail, knowing we'd be back. Then we passed the trailhead for Big Water Canyon, also planned for later in the day. We drove the short distance from there to the end of the trail and parked in the parking area.

We knew that China Neck and the Golden Stairs hike were nearby, but we didn't see where the hike was right away. There were signs marking the campsite, but no hiking signs. Then we spotted cairns off to the side of the main trail and followed them to China Neck.

China Neck is a thin strip of slickrock that is pretty cool to walk out on. We hung out there because we didn't intend to take the Golden Stairs down to the Land of Standing Rocks. We did plenty of hiking in Little Wild Horse Canyon the day before, and this day was largely for driving.

After enjoying the view for a while, we headed back to the Jeeps and back to Big Water Canyon. We were really enjoying the new scenery. 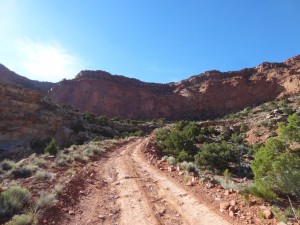 Led by Monica I.
In a round of deja vu we found ourselves back on the Lands End trail. This time, we got to the four-way intersection by doing the Poison Springs Canyon trail first, so we skipped the less challenging portion of Lands End. That left the best parts for us to do….
Join Us!
If you aren’t a Member or Subscriber, you can’t see all of the content on this site. Get membership information to see why this site is best when you join and log in