It wasn't the first time we'd wandered around Alice while looking for Kingston Peak. In fact, we've always tried to start the trail on the Rollinsville side just so we wouldn't end up lost in Alice. We had directions and a GPS, and we still made a wrong turn. That meant we went for a tour of Alice before starting up the mountain.

We'd had great weather down at the lakes, and when we got to the overlook we stopped to get out and look down. It was cool to see all of the lakes we'd been by earlier, all from high above them. The clouds were looking a bit menacing, and it seemed that the rain might be on its way. We hung out and managed to not blow away before getting back to the trail.

We stopped at the Rock House, of course, and everyone added or moved a rock for good luck. The views were really spectacular, but it was very windy and it was getting cold. We got back in our vehicles and headed down the first hill.

The hill was fun but it didn't seem as steep as it had in years past. When we got to the bottom it started raining. With the crazy wind, everyone put in windows to stop the horizontal rain. The tundra was really pretty, and the clouds made the scenery even more interesting.

We headed up the hill after passing some people on ATVs trying to put on rain gear. The climb was fun, and we took it slow. It wasn't long before we got to the top and we could see a few vehicles parked at the big switchback.

As we descended we could see the big group of Jeeps we met with earlier on their way along the narrow portion of the trail past the switchback. We stopped at the switchback but no one was interested in getting out in the weather so we kept going.

We were about halfway across the narrow section when a Jeep was on the other side coming the other way. He stopped and waited, and we made it to the other side without any issues or other oncoming traffic.

The weather started to change and it got sunny and warm again. We passed the big group of Jeeps and parked at a wide spot, and then they passed us again. Walt had ice cream sandwiches for everyone, and it must have been an interesting sight to see everyone eating ice cream in the mountains. They were good -- thanks, Walt!

We headed down, planning on checking out Mammoth Gulch on the way out. Like always, Kingston Peak was a fun and gorgeous good time. 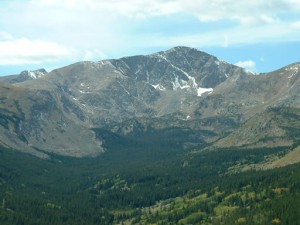