Trail Run on May 31, 2006
Report and photos by Monica I., Trail Leader
View trail information for Killer Kane

Ladd and Sean didn't get very far on this trail last year, so this year we decided to send a scout up ahead to make sure there was enough room to get all of us through it. Robert volunteered, so he went up alone.

He got about as far as they did last year, less than a mile up the road. Robert found way too many large rocks from a big rock slide blocking the way, so he had to turn around and come back. On the way, there was a very narrow section not too far into the trail.

We decided to go on to the next trail instead of sending people up one by one. Maybe someday this trail will be cleared and we can get farther up, but it wasn't going to be this trip. We left and headed out to do Kane Creek Canyon. 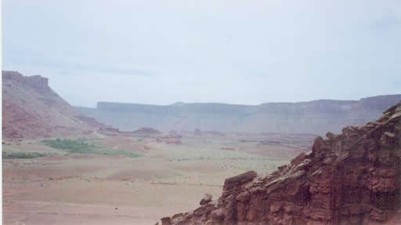 Led by Ladd G.
We did this trail right after doing Moab Rim. We had met some people from Arizona on that trail (Craig was driving and is featured in the pictures from our trip) so we went with them to check out Killer Kane. They had a magazine article about the trail and…
Join Us!
If you aren’t a Member or Subscriber, you can’t see all of the content on this site. Get membership information to see why this site is best when you join and log in