We did this trail right after doing Moab Rim. We had met some people from Arizona on that trail (Craig was driving and is featured in the pictures from our trip) so we went with them to check out Killer Kane. They had a magazine article about the trail and it sounded pretty extreme.

This is a shelf road for access to an old uranium mine. The trail starts off Kane Creek Road just past a cattle guard. It goes off the right of the road and climbs along the cliffs.

We got to the trail head at 11:30AM and decided to have lunch and learn something about our new friends. Craig has a 2004 Rubicon with passengers Daryl and Howard. We got the impression they were retired and up for a few days of wheeling.

The trail is not used much and only a short distance in we found out why. The trail is washed away in places, blocked with rocks in other places, and gets very difficult. We finally came to a place that was not worth passing. Others had passed but it seemed we would need to either move some rocks or risk excessive body damage. It was disappointing because we had gone only about 0.8 miles into the trail.

After some tricky turning around we headed back and were back at the trailhead at around 1:30PM. Our new friends decided to run Kane Creek Canyon, and we went our own way enjoying the short trail we had together. 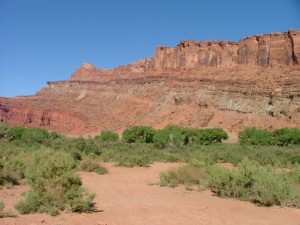 Led by Monica I.
Ladd and Sean didn’t get very far on this trail last year, so this year we decided to send a scout up ahead to make sure there was enough room to get all of us through it. Robert volunteered, so he went up alone. He got about as far as…
Join Us!
If you aren’t a Member or Subscriber, you can’t see all of the content on this site. Get membership information to see why this site is best when you join and log in