Even though Kelly Flats has been one of the club's favorite trails for over a decade, it had been way too long since we'd seen it. It's just one of those trails that we never seem to get to. We planned a day of some new trails, but Kelly Flats would be the focus. We met at Ted's Place and then headed down Highway 14 to the trailhead where we aired down.

The first hill was always fun, and then we had a surprise when we found that the hill was rockier and more challenging than before. That's always a good way to start the day, with some bumps. No one had any issues with it, only fun.

It wasn't long before we could see Heart Attack Hill in the distance, and then we were at the bottom of it, at the intersection with the bypass. We'd never actually taken the bypass before, so the plan was to cover both the hill and the way around it. We split up at that point, planning to meet at the top.

Heart Attack Hill lived up to its name, as always. There were so many options for lines to take on the way up, and that meant we got out a few times to check things out before climbing up the different sections. Ted got a nice wheelstand on the hill, but everyone else found ways up the obstacle without getting into trouble. It wasn't long before that group was up at the top with the next intersection.

The other group on the bypass took a lot longer. Most of the bypass is an easy trail with a few whoopdeedoos and tippy sections, but we were happy to find Aneurysm Hill, a fun hill climb with a few options. One option has big holes for your tires as you climb, and Monica and Bryan both accomplished some nice wheelstands on the way up it. The rest of the bypass was loose and steep in spots. When we got to the top we found the other group waiting for us.

A few in the group wanted to try both sections, so they made a loop by heading down Heart Attack Hill and then up the bypass. It's worth the extra time, for the extra challenges.

It was almost noon and it was flat and open at the top, so we stopped there for lunch. It was our annual 4th of July BBQ, so people broke out grills, chairs, tables, lots of food, and RC toys. We hung out for a while, like we always do for the BBQ. It was a great time, with perfect weather. A couple vehicles passed us when we were there, but we were surprised at how few people were on the trail on such a notoriously busy weekend.

We had many miles planned yet in the day, so we finally packed up and headed out. There were a few more fun obstacles on the way out, but we were pretty focused on getting to The Chutes. It always seems to take a long time to get there when you're constantly watching for it. We finally found it, though, and we all parked at the bottom.

We walked it, and it looked a bit more dug up at the bottom but largely the same as it always was. Good times! Monica started up first and soon found herself up against the rock on her driver's side with her passenger's side tire in the air. A bit of adjusting was needed to make it up the first part, and then she was up, through the corner, and squeezing through the last tunnel.

Matt was next, and he made it look very easy. He barely slowed down as he popped up the first hill, wound through the curve, and then cruised up and out of the exit. Awesome!

Ted was after Matt, and he didn't get as close to the rock wall. That meant that he didn't get his wheel so far in the air -- the longer wheelbase definitely helped. It meant he had less room for error on the curved portion, but it didn't matter. He made it through the obstacle without any issues.

Bryan was on the fence about doing The Chutes, but he was pretty successful already in the whoopdeedoos section of Aneurysm Hill. He was psyched up to do it, and we needed a YJ in the mix. Leaf springs are reliable for getting wheelstands, and this was no exception. He powered through, though, and had a pretty impressive trip up the first hill. His Jeep is much narrower and shorter than the Jeeps that went before him, so he just drove right up the rest of the obstacle.

The only damage was to Bryan's soft top. He caught the back corner on the rock at the start, rubbing it just enough to tear through it. It's a good battle scar!

The rest of the trail was easy and scenic. We saw a bit of muddy water here and there, but no big puddles. We were soon out at the parking area at the end, and we got out to discuss things. The plan was to do the Red Feather Lakes Loop, and a lot of the group wanted to get home much earlier than planned. So, some of us headed up Manhattan Road while the others headed south and out. Kelly Flats is always a great time, and we need to see it more often! 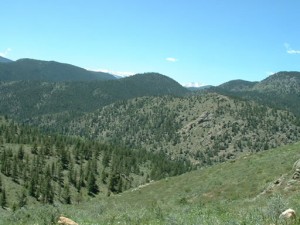