A few of us had Monday off for a long holiday weekend, so we headed up to Kelly Flats. We had a blast! We all ended up doing the Chutes in both directions and it really made the trail.

We had a small group of five as we left the Longmont meeting place and headed up to Ted's Place. The canyon was pretty busy for the 4th of July weekend, but it wasn't as busy as we'd seen it in past years. The canyon drive was gorgeous and even that was a nice time.

We were sad to find the rocks at the trailhead missing, but it wasn't long before we were at Heart Attack Hill. Monica went up first, taking the steep line up the left side.

Robert went up the middle, getting some great flex. Then Mark got some good flex too on the same line. It's a YJ thing!

Ladd went up the middle and also got some good flex. Then Bob went up the left line and got really steep.

We all had a great time but no one had any issues. We went a bit further, then stopped for a great lunch with a great view of the mountains around us.

Like always, we couldn't figure out how the people got to the houses in the middle of the trail. It's a mellow road right there in the middle, and it doesn't look like there are other ways in or out of the subdivision. It's weird! It started sprinkling and a lot of us put tops and windows in, planning for the large amount of rain we'd seen in the recent past on other trips.

We went around a few corners and soon found the Chutes. No one in the group had tried it before, but we were all excited to try it now. It wasn't raining, so the tops and windows came back off in most cases.

Monica went up the Chutes first and got a pretty good wheel stand near the bottom. There is a big hole where your driver's side rear tire ends up, lifting your passenger's side front tire high up in the air. She weaved her way through the rest of the rocks and got through it without an issue.

Robert came through next and got a much better wheel stand, to cheers from everyone. He moved his Jeep around the rest of the rocks without any problems.

We expected another huge wheel stand out of Mark, who went next, and he didn't disappoint us. It was very impressive! The rest of the obstacle didn't look too difficult for his Jeep.

Ladd tried a different line away from the rock wall, and we thought he would miss out on the big wheel stand. He did miss the big hole, but he still ended up with a tire in the air. There's no avoiding it. He looked like the rest of it would be easy, but he came in contact with a big rock near the middle and bent his driver's side fender flare in at the front corner. It popped back out, but it was pretty scratched up.

Bob came through last and got a really nice wheel stand, but it was Robert who really won the wheel stand contest this time. Bob just flexed his way through the rest of the obstacle like it was nothing.

We were all through, but then we had to turn around and come down it, in the opposite order. Bob started the trek down, finding the rocks in the middle to be the most difficult in this direction. He made it through, then dropped down the end section and right into the hole, popping his rear tire right up in the air. Now that was a wheel stand! Robert made sure to rock Bob's Jeep up and down to get a bit more air between his Jeep and the ground, too.

Ladd wasn't going to come down it, but then the rest of us talked him into it (very little convincing was necessary). He weaved his way around the rocks, sliding in the muddy area in the middle on queue. Then he came down the last bit and got a rear wheel stand to rival Bob's.

Mark came through it easily, not even stopping as he popped down the last bit of rocks. He wasn't going to sit there and let Robert rock his Jeep! He got to the bottom and everything had rolled or flew forward to the floor in the front of his Jeep. That obstacle is steep.

Robert weaved his way around the rocks in the middle, then came to the end, determined to get the best wheel stand again. He did it, popping his tire way up in the air. He sat there for a bit, enjoying the angles, and Bob enjoyed rocking his Jeep just a bit higher. Robert moved on, and his Jeep went even higher than before, but then it finally settled down.

Monica came down last and got a bit stuck in the middle. She backed up and took a slightly different line, catching her rear corner on a rock. She scratched her rear corner panel, broke the plastic around her gas cap, and mangled her license plate and the plastic area where the license plate sits. Whoops! She was hoping for a good wheel stand, but she didn't even get that -- too much flex. It looked good, though.

After the Chutes, we continued on the road until it turned into a trail. It was pretty mellow, but there were lots of mud puddles. Eventually we all gave up trying to not get muddy and we just enjoyed the mess.

This trail was a great time! We finished up and went on to try to find Sevenmile Creek before going home. 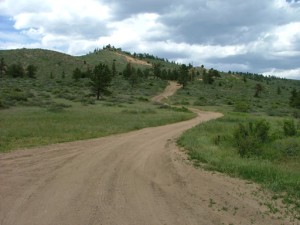