Trail Run on May 28, 2008
Report and photos by Monica I., Trail Leader
View trail information for Jackson Hole

We started Jackson Hole and left Robert, Pat and Dane to work on the installation of Robert's new fuel pump. Hopefully they would be able to join us on the trail at some point. This was the first time we'd been on Jackson Hole, though we'd seen it a few times from the Cliff Hanger trail.

We easily found the trailhead at the Base Camp Adventure Lodge sign and headed in. There were signs and gates at the start that directed us to specific parts on the trail and kept us out of the lodge property. It was easy to find our way.

It soon got extremely rocky, and it wasn't a particularly good time. It was very bumpy, and everyone was quiet as we worked our way through it. We went over a ridge and to the other side, and luckily it smoothed out at the bottom.

We were going to run the loop on the far end in the clockwise direction. We passed the intersection we'd come back to later and kept going parallel to the river. We headed to the other side of the river from the potash plant, and then stopped suddenly as we almost missed our sharp right turn. We all turned into the tight brush.

It was pretty overgrown at that point as we followed the transmission lines. It was a bit rocky in places, but not as bad as the early trail. We worked our way around the giant bluff to the other side.

When we got to the parking area for Jackson's Ladder we all got out to stretch our legs. Don and Michael went up the narrow foot path about halfway up, but they still couldn't see where it went. We all were amazed that people carried their bicycles up that path. We'd be doing Cliff Hanger the next day, so hopefully we could find the top half of Jackson's Ladder then.

We got back in our vehicles and continued on the loop. The other half of the loop was smoother but it didn't look as well-used. At the end of the loop, we had to follow cairns to get back to the main trail. It was definitely more difficult to find on this side of the loop.

We worked our way back out and through the bumpy section. We kept watching for Robert and his group, but we never saw them.

After we finished the trail, we headed over to where we had left Robert, Pat and Dane. They were just finishing up repairs, and Robert's Jeep had started. It was running roughly at first, but then it was fine. Nice job, guys! It was too bad they had to miss the majority of the day, but it was nice to be heading back to town with the entire group intact and plenty of daylight. 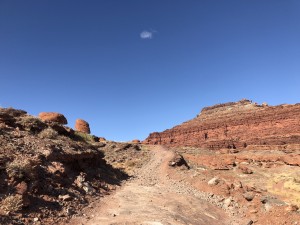 Led by Matt K.
Jackson Hole was the last trail that we ran for this Moab trip. Most of the Jackson Hole trail was easy going, but it had some great views. We didn’t see or run into anyone until we were back on the way out and almost back to the beginning of…
Join Us!
If you aren’t a Member or Subscriber, you can’t see all of the content on this site. Get membership information to see why this site is best when you join and log in