Though we had done Liberty Trail a couple of times before, we always chose to take the long way out back the way we came rather than the quicker way out Independence Trail. The way out "Indy" is much more difficult, and we always opted out of it. This time we decided to winch our way up Bunker Hill and see what would happen. It didn't take us nearly as long -- about an hour instead of five or six hours -- but we paid for it in trail damage.

There were a few buggies ahead of us, so we watched them go up it first. They took a line up the bottom part of it that seemed too big for us, though. They were going up the far left side, and almost all of them had to work on it. One of them even broke an axle shaft right away and ended up having to give up on it.

Mark decided he'd see if he could get up the bottom part without hitting his body or door on the big rock to the left. He worked on it, but soon realized he'd have to winch. He winched himself up it and managed to miss hitting the rock by an inch or two. It was really close.

The middle part of it was also quite a challenge, with another rock on the right side that also came within an inch or two of scraping paint off of Mark's Jeep. Winching helped keep him further to the left while he leaned his way around it, and he missed out on body damage.

When he got to the base of the waterfall at the top of Bunker Hill, the gathering of onlookers noticed that his spring shackle had flipped up and his leaf springs were pretty messed up. Everyone worked on popping the shackle back out, but nothing was working. In the end, Mark used a snatch block to attach his winch to the shackle. A few rocks needed to be stacked so he could get his bumper up and tires on the waterfall, but then he popped the shackle back out and winched himself up and over the rest of Bunker Hill.

That meant it was Monica's turn. She got up onto the bottom and eased into it, careful not to hit her body or door on the rock. Then she heard a familiar ratcheting noise and heard her front ARB locker leaking a lot of air. Her front locker was gone and it felt like the spider gears were broken and still breaking, so she hooked up her winch.

When she got to the waterfall at the top, she was pointed to a section on the far left. It ended up being a pretty easy route up the waterfall, relatively, and she winched herself right up without much effort.

The buggy with the broken axle shaft didn't have a winch, so Mark used his winch to help the buggy get up and through the obstacle. Mark ended up breaking his snatch block in the process, but the fix was a fairly cheap one so he was okay with it. It took awhile, but the buggy finally got up and out.

It was raining at that point, and Monica even needed to winch herself up the last part of Freedom. Without a front locker it was making her slide all over the place -- better safe than sorry.

We made it out and started to head off to the gas station in Penrose. Mark heard a noise and suddenly pulled over, and found his front drive shaft u-joint was destroyed. He tied the drive shaft up and out of the way, then we were off.

Monica's front end was definitely locked and the spider gears were still making a lot of noise. The turn into the gas station proved to be difficult and she almost ended up in the ditch next to the entrance. They realized this wasn't going to be a good drive home unless something got fixed.

Mark heard something going on in his brakes so he checked and found his rear brake pretty much gone and his emergency brake cable broken. It was a quick fix for him, though.

The guys came up with a great plan for Monica's situation. They took the stub shaft off of her spare axle shaft and switched that out with the short side in the front axle. They stuffed a rag in the axle tube to stop the grease from coming out, and basically she was no longer attached on that side -- and no longer locked. That was the trick, and it worked great!

We stopped for a quick bite to eat in Pueblo on the way home, then made pretty good time and got home fairly quickly. Monica found out later that her whole ARB is destroyed, but it was still a great trip! 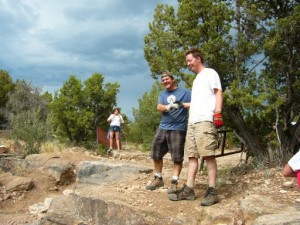 Led by Monica I.
After getting to the end of Liberty Trail confidently, we had decided that we were going to exit out of the Penrose trail system via Independence Trail. There were at least a dozen vehicles at the bottom of the trail, so we had to shuffle some vehicles around with other…
Join Us!
If you aren’t a Member or Subscriber, you can’t see all of the content on this site. Get membership information to see why this site is best when you join and log in