Another fantastic run on Holy Cross! We got an early start this time so we actually finished the trail in daylight (the first time for us). Bill pulled apart his front drive shaft but MacGyvered it on the trail to complete the entire run still in 4-wheel drive. Other than that and a few bangs and scrapes we finished the trail without any damage.

The trail damage happened at the first small creek crossing, the one before the French Creek obstacle. We all went up the usual way on the right side of the rocks, but Bill was feeling adventurous and tried the left, crazy side of the rocks. He would have made it, but he had recently moved his front axle forward about an inch so when the drive shaft extended to climb the rocks it came apart. With a chisel, file and other tools that Ladd had with him (Ladd has everything with him) he worked on it for a bit but the angle was too severe to finish the job.

Then Fred and a friend came down the trail from the top. We didn't know he was on the trail, so that was a nice surprise. Ed was above Bill, who was winched to his back bumper. Fred then winched himself to Bill's rock slider and they carefully got Bill down to level ground after Bill used a ratchet strap to hold the drive shaft in place.

It only took Bill another few minutes to get the shaft cleaned up and reinstalled, ready to go in 4-wheel drive. Nice trail fix!

It had been sprinkling off and on up until this point, but then the weather cleared up for French Creek. Monica tried the center line for awhile but with bad gears (3.07s) and no lockers on wet tires it just wasn't going to work out. Everyone took the left line and we drove straight through without any incidents. We didn't even meet anyone else there. It was the quickest trip through the Creek ever!

Possibly the scariest part of the run was at the off camber rock stairs past the Creek. They were slick, muddy, and tough to climb. Monica and Ladd both had their back ends slide far around toward the edge before finally getting enough grip to climb the stairs. Ed finessed it for awhile before deciding he wasn't going to make it, getting a strap up. Bill went at it with lots of throttle, making up but not without startling everyone else.

Ladd almost got to Cleveland Rock past the City but with all the slick mud he couldn't get over the rocks before the big obstacle. That's as far as we got.

Bill and Monica both decided to tackle the center line of French Creek on the way down. Bill has the longer wheel base and made it look easy. Monica got hung up on her rear bumper but other than some scrapes on the bumper made it down without any issues. What a blast!

We made it down and off the trail while the sun was still up, having dinner at Chilly Willy's in Minturn at 8PM. It was a really great run, as always. 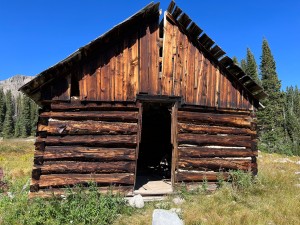