Holy Cross was the only trail that we ran for the day. When leaving the house, it was rainy and foggy for half of the drive out to Holy Cross. But, then it cleared up and the sun came out for a great day.

We aired down near a campground just after we turned onto the dirt road that leads to the trailhead for Holy Cross. A group of Jeeps pulled up behind us. They were some people Calvin knew. We kept meeting them on and off throughout the rest of our time at Holy Cross.

We all had fun running at the one-way part of Holy Cross at the beginning. None of us had any issues with the one-way part, except for one spot with big rocks that was tight with very little room for the Jeeps. So we needed to spot each other past those rocks.

Soon, we made it to the first obstacle right after the warning sign about “Holy Cross trail goes from moderate to difficult” -- the steep and tippy ledge climb. We all went to the right side of the climb. It turned out to be the easiest climb of the day.

As we continued up Holy Cross, we ran into a group of people just finishing the second obstacle. Matt was the only one to go up the far-left side of the obstacle. The rest of our group went up the right side of the obstacle. We all had to try a few times to make it up the rocks, and Calvin had to be winched up this one. It wouldn’t be the last time we had to get out the winches for the day.

We reached French Creek, the third obstacle, not too long after. We all had to try a few times to make it across French Creek. Matt took the right side, and the rest of the group took the center line. Brian would have to get winched off the big rocks, and he damaged his fuel tank skid plate in the process but did not leak any fuel. He got lucky with just denting his skid plate, pushing it slightly into the gas tank.

The last obstacle of the day didn’t give us any trouble. The obstacle was just a steep, small hill climb.

The rest of the trail was not bad at all. When we got to the old town of Holy Cross, Brian and Calvin stopped to look at the old buildings and the town's remains.

Matt and Jason drove up to see Cleveland Rock, a big obstacle that we weren’t going to try to drive. We had to stop halfway to Cleveland Rock because a Jeep was in the center of the trail and would not start. We ended up walking to the rest of the way to the obstacle because it was only a short walk. Nobody was on it at that time, unfortunately.

When we walked back to our vehicles, the Jeep in the center of trail that had wouldn’t start was fixed and running. They had a bad wire going to the battery.

After another short break at the old town of Holy Cross, we started the way back down the trail to go back home.

At French Creek, Brian got high centered. We had to winch him off the rocks, and that was the last time for winching.

At the second obstacle, it took a few tries to get everyone down the obstacle. Matt was the only one to go down the right side of the obstacle. It ended up being very tippy and the line everybody else took was better.

The rest of Holy Cross went easy for the most part with no issues.

We went to the campground to air back up. Both Brian and Jason realized that they broke their steering stabilizer shocks. Jason had to remove his from the jeep, because it was bent and leaking.

It was a good long day on the trail! 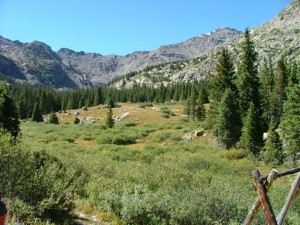