Hole In The Rock Trail

Trail Run on May 23, 2013
Report and photos by Monica I., Trail Leader
View trail information for Hole In The Rock Trail

We planned on driving from Denver to camp that night on the Hole In The Rock trail, but I-70 was closed in Glenwood Canyon and it threw a wrench into our plans. It put us a few hours behind, so we found the trailhead just before lunch. We all got gas in Blanding and we all had extra gas with us. We'd end up needing it.

The beginning of the trail is easy and we stopped for lunch at the first tree we could find. It was a hot day already and the shade was nice. It was also really, really windy so we ate a lot of sand. Utah has been "putting the crunch in your lunch" for ages and it was on a roll. We didn't hang out for long, as we were eager to get started.

Ladd had been on Hole In The Rock before, but he did it before the washout in 2009. That meant that a lot of the trail was new to him, too. When we turned to do the new connection between the old and new trails it definitely got more fun.

There were a few ledges and slickrock sections here and there, but it didn't really get fun until Twister. We all got out to enjoy watching the others come down the obstacle. After Twister came a lot of domes and fins of slickrock that were a lot of fun. We got to the sign pointing the way to the other side of the washout but we had to skip that, too. We were running low on time.

After that sign we were on the old trail, the one Ladd had done before. It suddenly became one of those trails we call "Shake and Bake" because you can't go very fast as you're thrown from side to side, over and over. It was hot, and it shook us for a while.

We found the sign for Grey Mesa and more fun started. We even found a woman in a very clean Xterra hanging out in the wash. There was a ledge there that would definitely be fun getting back up later.

We stopped at the bottom of the Dugway to assess the situation. We couldn't tell at first glance that it was actually a long and challenging obstacle. You popped up the beginning part, steep but manageable. Then you cut over to the other side and started climbing. It was definitely an andrenaline rush.

Monica was first up the Dugway and she was feeling good until she got on a bad line near the edge of the shelf road, got tippy, and needed a spot back down. It was a bit of a scare. Jeffrey spotted her down and then offered to drive her Jeep through that part. Monica happily accepted and then everyone got a spot through that section, thankfully.

When we were all above that obnoxious section we found ourselves at the Dugway Camp, a wide and flat part of the Dugway that was sheltered on three sides by steep fins of slickrock. It was dinnertime and the camping looked good, so we stopped there for the night. It ended up being the best camping spot on the whole trail, and we enjoyed it.

The next morning, Monica decided to relax and wait for the others to run to the end and back. We figured that would take three hours or so. Like everything else, we underestimated the time and it was mid-afternoon before the group was reunited.

The rest of the trail was a blast. The Dugway continued with more of the slickrock hill, and we thought it was a fun way to start the day. We found some more slickrock sections after the Dugway, too. Once we were at the top of the Dugway we were on Grey Mesa and the trail was nice and smooth in most parts.

The Great Bend was probably the most scenic section of the trail. You could see the river twist around in the canyons and we had a great view of it all. We stopped there to relax for a bit and take lots of pictures.

The mesa was pretty easy to get across, and the trail was usually easy to find. We were heading down off of the mesa when we came to The Chute, a steep drop-off on slickrock. We couldn't believe they brought horses and wagons through here. We were all careful and spotted each other through it, and all went well.

We could see Lake Powell in the distance every once in a while, and when we got to the end of the 4x4 section we could even see the actual Hole In The Rock across the water. It looked pretty crazy. We decided not to do the hike to the end this time. We'd have to come back and do it another time.

It had taken us four hours to get from the Dugway Camp to the end of the trail. Miraculously, it only took us two hours to get back. The fact that we knew the trail really helped, and we didn't get lost or need to get out to find our way. We took a quick break with Monica at camp, but then we headed back down the Dugway.

The trail is just as much fun on the way out -- maybe even more fun. The "Shake and Bake" section wasn't any fun, still, but at least we knew it wouldn't last forever. It didn't seem to take us long at all to get out.

We even saw some other vehicles on their way in when we were almost out to the trailhead. Otherwise, the trail was deserted. It was a really great time, and we looked forward to doing more exploring the next time.

We ended up finishing at dinnertime again, and we headed into Halls Crossing for gas. We talked about trying to find another campsite nearby, but in the end a shower just sounded too good. We paid the fee to stay in the Lake Powell campground at Halls Crossing, and it was a welcome rest. It was clean, and the showers were glorious.

Ladd left for home early in the morning, and the rest of us got up ready to go. The trip hadn't gone exactly to plan, and the ferry was broken. It wouldn't be running, so we needed to drive around the lake the long way. A little pavement would be nice, anyway. 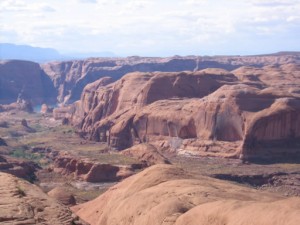 Led by Ladd G.
We left Moab on May 7th at about 3:00PM and headed south to Blanding, about 73 miles away. You should stop for gas in Moab because the next gas station is at Halls Crossing, 83 miles from Blanding. We didn’t and though we made it we came off the trail…
Join Us!
If you aren’t a Member or Subscriber, you can’t see all of the content on this site. Get membership information to see why this site is best when you join and log in