Trail Run on May 24, 2015
Report and photos by Monica I., Trail Leader
View trail information for Hidden Splendor

Though most of our trip to Utah would be spent in the San Rafael Swell north of I-70, we were going to spend one day south of I-70. The area behind San Rafael Reef on that side of the highway is called Sinbad Country, and it would prove to be a very scenic area. This was the only day we'd do a trail that was already on the website (Molly's Castle). We started at I-70 exit 131, a place we were getting really familiar with as it was where Buckhorn Draw Road started the day before.

Hidden Splendor is a very scenic road, and it is very easy. We saw SUVs on the road all the way to the end, and they all had an easy time on the trail. When we got to Reds Canyon, we did that trail and dipped down into the mud, and then we came back up onto Hidden Splendor.

The last bit of the trail in Keesle Country was probably the most scenic as it wound around. At one point, we pulled over to take some pictures and there was a sudden traffic jam of nine SUVs along with our three Jeeps, all out in the middle of nowhere. It was very random, and we had a good laugh about it.

When we got to the end we saw a few SUVs parked near the Hidden Splendor Mine area, so we crossed the airstrip and headed down to the river instead. That descent was the only part of the trail that wasn't wide, graded, and really easy. Matt came flying down the hill, parked, and everyone got quickly out of the car. His dash was smoking and something was on fire. He pulled everything apart and found that his stereo was what was smoking. The fuse should have blown, but it didn't. No more Jeep music for Matt this trip! At least nothing else caught fire.

When we got down near the water, we found a nice parking area with lots of tents and cars. The tent owners were probably out in Muddy Creek or on one of the other fun hikes. One of the tents was pitched right in the middle of the road, too. That's a first. It was flat there, and we went around it.

It was a great place for lunch, so we hung out for a while. We walked around near the river, enjoying the scenery. We first thought that the Hidden Splendor Mine was near the water, so we wandered around, looking for it. It was a nice time out of the Jeeps. We'd definitely camp down there next time to do the Muddy Creek hike. We saw a video of someone landing at the airstrip, and it was a great bird's eye view of the area that we really liked.

After lunch, we went around to the washout near the Hidden Splendor Mine. Only Matt wandered over there to check things out. He climbed up about halfway to the mine, realized how far away it really was, and then came down. We would need to save exploring more (and seeing the Motel 6) for another trip.

We were really enjoying being out there, but we had more trails to do so we headed back after a while. This was a great trail. 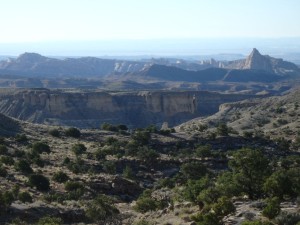 Led by Monica I.
We usually spend four days on the trails when we go on longer trips, but we were at our home base in Green River a day earlier than usual this trip.  We had been planning to hike the Chute of the Muddy River for years, and the day was finally…
Join Us!
If you aren’t a Member or Subscriber, you can’t see all of the content on this site. Get membership information to see why this site is best when you join and log in