Trail Run on May 11, 2017
Report and photos by Monica I., Trail Leader
View trail information for Hidden Splendor

We usually spend four days on the trails when we go on longer trips, but we were at our home base in Green River a day earlier than usual this trip.  We had been planning to hike the Chute of the Muddy River for years, and the day was finally here.  We set up in Green River and got to bed early the night before, and it was 6AM when we were on our way out to do the Hidden Splendor trail.

It was nice watching the long shadows get shorter in front of us as we drove along the easy trail.  We saw wild horses here and there, which was pretty cool.  We missed one turn that killed about 20 minutes of our morning, but soon we were at the airstrip near the end.  There were a few people camping there, and when we got to the bottom and the end we had it to ourselves.

The information about water flow is from pretty far up the river, but it's a good indicator of how much water we'd find on the hike.  When we looked it up the day before, it was at 150 feet per second.  That put it at the high end of where we'd be comfortable hiking in the water, so we had a couple inner tubes with us.  We talked about doing the other hike at the bottom, but the day promised to be clear and sunny so we decided to continue with the plan of hiking the Chute.  We were moving everything to one Jeep when a truck parked next to us.  They were planning on kayaking what we were planning on walking.

We left Matt's Jeep and piled into Monica's Jeep for the 40-minute drive to the start of the hike near Tomsich Butte.  The water there was flowing, muddy, and cold but it promised to be a nice day.  We blew up the two tubes and got in, and we were off!  At that pace, we'd be done in no time and we were glad we had the tubes.

We made it a couple of miles before one of the tubes got a large rip in the bottom.  We didn't have a patch kit, so we piled the backpacks in the remaining tube and Matt walked it down the river on a long rope.  There was shore on both sides most of the time, so we were hiking and wading.

Then the river got deeper and stronger, and the shore disappeared.  We were in between steep walls of rock on both sides, and the water kept getting stronger and deeper.  We'd be walking as best we could, and then the bottom would drop out.  We'd find ourselves swimming until hitting rocks we couldn't see, and then being forced through rapids that would be intimidating even in a kayak.

About 13 hours later we found ourselves at Matt's Jeep again.  It was at about 9:30PM, and we were cold, wet, bruised, and bleeding in spots.  We drove back to Monica's Jeep only to find the battery dead.  Our usual safety measures like jumper cables were back at camp because we had to leave our vehicles unattended all day.  We were starting to worry when the kayakers showed up, and they had jumper cables.  We got a quick jump and we were on our way back to Green River, and then Monica's Jeep lost its serpentine belt and she had to leave it on the side of I-70.  This would be Monica's last trail as a driver for the whole trip.

When we showed up, Mike and Walt ran out to us, thankful we were okay.  They had been watching the water levels and it had jumped up over 200 feet per second over the course of the day.  They had been talking with the Sheriff's office, and they were about 30 minutes away from sending Search and Rescue out to find us.  They were also worried about the kayakers.

It was a crazy trip!  If you get to the drop-in spot at Tomsich Butte and the water is more than ankle deep, have something like a kayak or don't go at all.  Be prepared for anything.  Bring multiple tubes per person with patch kits.  Or hike it in the summer when there isn't much water.  It was definitely an adventure. 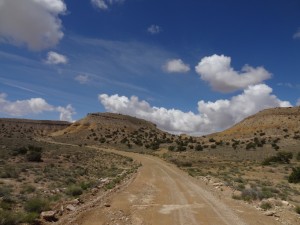 Led by Monica I.
Though most of our trip to Utah would be spent in the San Rafael Swell north of I-70, we were going to spend one day south of I-70. The area behind San Rafael Reef on that side of the highway is called Sinbad Country, and it would prove to be…
Join Us!
If you aren’t a Member or Subscriber, you can’t see all of the content on this site. Get membership information to see why this site is best when you join and log in