We came off of the Tusher Tunnel trail and it was still fairly early in the morning. Even though we had a big day planned there was no way we'd drive by the Pickle without checking out the first obstacle, 50-50. It's a lot easier to find now, with a few new signs marking the way. 50-50 looked the same except for a huge rock in the middle of the base of the hill that could make things interesting. The longer we stared at it the more we wanted to try it, but we didn't want to take the time out of our day. After doing some exploring we turned around and went back to the trail.

Finding the turn into the canyon was easier now with a new sign at the turn. It was a fun little hill of sand that took us down to the canyon. The end of the Pickle trail was marked with a sign now, which is nice. We headed into the wash to go into the canyon instead.

The sand in the canyon is a blast, and we had fun in it. The walls around us were huge and it was going to be fun working our way around the canyon later. 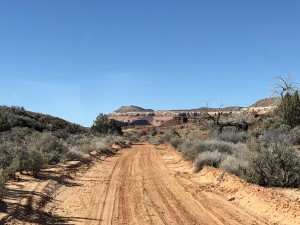