The omens on this Friday the 13th started out trying to tell us not to go on the run. Ladd broke his track bar mount in the gas station parking lot that morning, Monica said "at least no one's rolled yet" at breakfast, and two of the other rigs that had come to Moab with us were already broken and out of commission for trail damage earlier in the week. Then in the parking lot Terry broke his driver's side view mirror off. But we were stubborn and decided that we needed to press on and redeem this notoriously unlucky day.

It was a beautiful day. We finally started onto the trail about 10AM. Everyone seemed to take this run really slowly and carefully at first. But then we started to gain our confidence.

The first series of slickrock hills were a lot of fun. Every time we crested a hill you could see the black tire marks heading off into the distance. We just kept heading toward Hell's Gate and the overlook.

Once we got to the overlook there was a large group of ATVs and Jeeps sitting at the top of the obstacle's exit. They all looked at us and started asking if any of us were going to try it.

Austin and Jeffrey both knew they wanted to try it. After the overlook turn around Austin headed past the entrance to drop his passenger at the exit and Jeffrey proceeded down the entrance to the obstacle. The entrance to Hell's Gate is actually a very steep decent that you probably want a spotter with you in order to enter it. Then once at the bottom Jeffrey came around the corner and was finally able to look up at the obstacle itself. It was his first time running Hell's Revenge and the only video he had seen of it was the famous one showing someone rolling down to the bottom. He was so excited when he started up the hill that he forgot to turn on his lockers. About a quarter of the way up his wheels slipped and reminded him to turn them on. Roger spotted Jeffrey up the right side of the obstacle and that was the perfect line. Without difficulty, Jeffrey drove right up and out.

As soon as Jeffrey made it up and out, Austin and Terry headed for their Jeeps. Terry was the next through and Austin followed soon after. Both of them made it look even easier than Jeffrey had. While watching Terry and Austin go through Hell's Gate, some other people watching told us about how a person that went through before we got there almost went over, but luckily there were enough people there to jump on his bumper to keep him from going over. It sounded like we missed some action.

When we left Hell's Gate we gained eight other vehicles that trailed behind us until we stopped at the Bath Tub. Terry, Austin and Jeffrey all played in the Bath Tub. After playing we stopped for lunch and the group that was behind us pushed on ahead.

We looked at the Car Wash and Mickey's Hot Tub and decided that they were better left to the bigger buggies. We pushed on and headed down the Whale's Tail only to see off in the distance that other group was at the Escalator. When we got there the Land Cruiser in their group was negotiating the obstacle. A guy on the trail said he had seen it spotted and knew the proper line.

Jeffrey ran up and watched how the guy was spotting the Land Cruiser through the obstacle and when they made it through Jeffrey asked if the spotter would be able to spot him through it. The guy said he could and Jeffrey headed right in. Jeffrey had no problems up the first part, but then when he got up into the second section the line he was on caused him to teeter slightly and almost flop on his driver's side. He eased it back slightly and got a better line, and then he was able to drive right up and out of the obstacle. He ended up scraping a small bit of paint off of his rear corner guard bar.

Austin went next and used the same spotter. Again, Austin made it look easy.

Before Terry had a chance to try someone cut in front of him in line, someone who was being guided by professional Moab Jeep tour guide. They tried but they weren't able to make it up the first part of the obstacle. He eventually gave up and it was finally Terry's turn. Terry had a lot of trouble making it up the first portion of the hill. There were a couple times we thought he was going to flop due to a bad bounce. But once his tires were heated up he crawled right up and the helpful spotter was able to guide him through the second half of the Escalator with no issues. Walt and Roger were enjoying the show of the day and the group spirit was really high.

We proceeded on and then came to the Tip-Over Challenge. We looked all looked at it and decided that after our great day of wheeling we didn't want to jinx it and decided to take the bypass and head for the exit. At the end of the trail we all got out and cheered because we made our own luck and reclaimed the day. This was the luckiest Friday the 13th we've ever had. 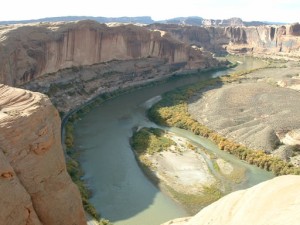