We had gorgeous weather for our trail runs. It was sunny and not too chilly considering there was snow on the tops of the mountains. We were planning on lunch at Grizzly Lake so we were running that trail first before we tackled Iron Chest.

We accidentally passed the turnoff for Grizzly Lake so we were making u-turns in the road when Austin (Austin III) felt a problem. A quick look under his Jeep showed that his lower control arm mount had snapped right off the axle. At least it didn't happen on the highway or the trail! The guys chained his axle to his front bumper and had it held securely so Austin could hobble back to Buena Vista to get it welded back on. Unfortunately he was out for the day, though.

The rest of us headed up to Grizzly Lake. The first stream crossing was very shallow, and the obstacle was pretty easy to get up and over. It was the optional, rocky turn to go uphill that made things interesting.

Cheryl went first and connected her transfer case skid plate with the rocky ledge. She adjusted her line and got up it just fine. Dane went high up on the right side and didn't have any issues. Then Bob went, and he had the clearance to make it over the ledge.

The rocky climb up the hill on a shelf road was interesting, like always. It's in the sun so there was no snow on it, which was good.

We saw the first of the snow-covered trail once we were in the shade, just before the second stream crossing. There were a few animal tracks and a hiker had been through the area recently, but there were no tire tracks. There were a few places where we had to stop to look around for the trail, but we always managed to find it without too much effort.

We got to the lake right at lunch time and we had the place to ourselves. It was a little windy but the sun kept the temperatures nice. It really is one of our favorite mountain lunch spots.

We finally headed back down and it wasn't long at all before we were off the trail. We made the left turn and started up Iron Chest right away. 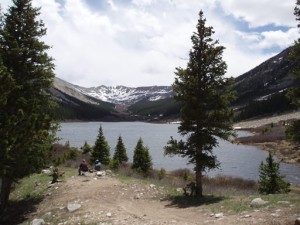 Led by Matt K.
It was a great, sunny day and neither one of us had ever been to Grizzly Lake. Matt was in the lead and we almost went past the trailhead, but we ended up finding it, finally. After we got started, Matt went through the stream first and started to go…
Join Us!
If you aren’t a Member or Subscriber, you can’t see all of the content on this site. Get membership information to see why this site is best when you join and log in