We had just come off of Coffee Pot Road and we had high hopes for Grizzly Jeep Trail. We had read that there were challenging rocks in the middle. The rocks weren't at all challenging, but the scenery was amazing, making this one of the best trails of the day.

The trail was muddy the entire way, and we all started to get our Jeeps covered. The puddles were plentiful, and you couldn't avoid them. They were right in the middle of the trail and covered it from edge to edge. There were some tracks from people making illegal bypasses, but naturally we didn't take any of them.

We saw some people camping at the top of the big ridge. They were on ATVs and they were happy to see such muddy Jeeps. They took pictures of all of us, and we were on our way.

It was cool going over the flat rock. It was like Moab, and it made us all miss the slickrock. Even that rock had puddles in the depressions.

The views were phenomenal. We were surrounded by wild flowers, and the green covering everything was absolutely gorgeous. We couldn't get over the fact that this beautiful area had a maintained trail running through it so we could see it. Wow!

The unnamed pond was pretty, and we stopped for pictures and to stretch our legs. We wanted to get to the Grizzly Cow Camp, though, so we headed back out.

We crossed the stream and parked at the camp, and soon it started raining. We put tops and windows on our Jeeps (though Bill didn't have enough to close his Jeep) and hurried to get under the porch of the Forest Service building. All four of us fit nicely under there, out of the rain.

It started raining again while we ate, and we enjoyed sitting there in a dry area, watching the rain and the scenery. It couldn't have been a better lunch. That's one of the best things about wheeling -- the fantastic lunch spots.

We checked out the waterfall, and it was very scenic. We didn't hike down to it, though, because we still had a lot of ground to cover. We packed up and headed back out.

It wasn't long before we were at the end of the trail at the White Owl Lake trail. We turned right to head back to Coffee Pot Road. Grizzly Jeep Trail ended up being one of the best trails of the weekend, simply because the views were so amazing. It was also one of the best lunches we've had. 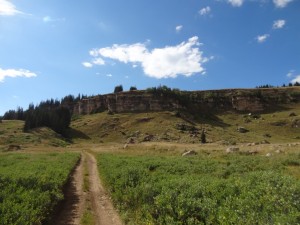 Led by Monica I.
The Flat Tops trails are often little more than bumpy roads, but Grizzly Jeep Trail offers a bit more fun. We were looking forward to it, so we finished White Owl Lake and started Grizzly Jeep Trail on the western end. The warning signs about high clearance and four-wheel drive…
Join Us!
If you aren’t a Member or Subscriber, you can’t see all of the content on this site. Get membership information to see why this site is best when you join and log in